Ugh.  Blogger has changed its format and way of publishing posts.  That means every time I try to open one, I have to Unpublish it, and the date tries to screw me.  Perhaps the gods want me to stop blogging every day.
I would be quite happy to oblige them, but how else would you find out about my butt crack problems and unrequited crushes?
Today was my early day, but when my alarm went off at 7:15, someone in the room said, "Eff this noise" and hit the Snooze button.  Can't imagine who it was (honestly, do you know anybody else who would say "Eff this noise?").  But hey, it was still an early day for me.
I got some work done and went to Target--the greatest of the big box stores--and made myself some soup and drove over to the park to lay out my blanket and force myself to write.  It was in the high nineties today, but not quite as hot as it has been.  Out of self-destructive spite, I forced myself to take off my shirt and run up and down the stairs before I allowed myself to go home.  And that was hard, not because of the stairs, but because of self-consciousness.
As far as the writing went, I thought I did pretty well (easily a thousand words), but when I did the word count just now, it was only 903.  I also wrote two paragraphs of brainstorming how "Hatchling" could end,* but those don't count for word count.
Basically, the story is about two teenaged neighbors that discover an egg on a mountain and fall in love one Arizona summer.  Yesterday, I started writing their first fight, and today I finished it, but it didn't go anywhere other than a brief moment where he was angry at her and she considered walking away, but decided to stick with him instead.  Right now, I am thinking that they will break up once school starts, he will go through an endless procession of substitute girlfriends (he started out as a skinny thirteen year old and has somehow evolved into my Uncle John in less than a month), and she will go to the Homecoming dance with a backwards Rish Outfield-type boy in her Journalism class.  Then a big fire on the mountain will happen (in October or so), and they put aside their break-up to go see if the hatchling is alright.  And then . . . it just ends?
Like I said, that's just what I've been thinking about.  Tuesdays are the days I go do my run while it's still daylight out, so I'll think about it while I suffer.
Wow, if anything, that was an understatement.  It was rough today, but I did it, and that made me feel like a success.  Got in a lot of sit-ups too.  If only it was for some reason.
Sit-ups Today: 222
Sit-ups In August: 655
I went to my cousin's, and he had another of those energy drinks waiting for me, before I got sleepy.  It was wise too, because we made it all the way through the evening, and then some, and when I got home (at 2:30), I wrote a little more, actually breaking up Rick and Talia, for the most spurious reason I can think of.  No reason those two should be any happier than you or me, right?
Words Today: 1469
Words In August: 3157
*I think one of my goals for August is either to finish it or figure out its ending, I forget.
Posted by Rish Outfield at 10:25 PM No comments:

It should be against the Geneva convention to have to blog and write every single day.  My alarm went off this morning with the sun just clearing the horizon, and my mom and I drove down to my aunt's new house, just a half-mile from my niece Cathexis's place, to unload their storage unit and put the stuff in the new place.

Luckily, my brother, my cousin, and eventually my uncle and other cousin all showed up to help lug stuff around, so it wasn't too exhausting.  Too exhausting was the middle of the day, when I started to feel punchy and too tired/weak to pick up a watermelon that had rolled to the back of my mother's car's trunk.

I tried.  Only managed 280 words.  I'm tempted to quit now, but I haven't done any sit-ups.  Maybe that will fill me with energy or determination or something positive to get me through my tiredness.

I hope nobody saw me on my run tonight (doubtful, since it was past twelve-thirty when I went out), since I ran slower and stiffer today than I usually do.  Sometimes I'll watch my shadow as I go, and wonder how dorky my running looks to the zero other people who might be watching.  To me, it looks like Fat Bastard trying to run in the Forrest Gump leg braces, but your mileage may vary.
No, wait, I did get a cat-call a couple of weeks ago as a group of teenagers drove past.  I'd claim it hurt my feelings, but it was the closest I've felt to a Generation Z since last noogie-ing my niece.

Posted by Rish Outfield at 10:56 PM No comments:

If you support me over on Patreon, you get an address every month, wherein I try to tell an interesting story and go over my goals for the month.  Because each month (for me) is approximately four days long, I do these every week.

I'm going to list this month's goals here . . . because I hate you.

I went into Walmart today, and actually saw one of those "Breaking News: I Don't Care" t-shirts I mentioned yesterday.  It was on clearance and was even in a Medium.  But I didn't buy it.  Breaking news: the sentiment of that shirt sucks.

I may not make it.  My aunt is moving into her new house tomorrow, and I'm supposed to be there at eight am to help with heavy-lifting.  I just came back from my run, all sweaty and still wheezing when I breathe (not sure why I ever thought running was a good idea).  I did some sit-ups, and I can't stop yawning, and even though I splashed water on my face, I'm still hot.*

I wrote a few words, but I am so very tired, I don't know if I can even get a hundred words.

I struggled for a half hour more, typing what I could, until finally, I deemed the fight fought, and embraced the (quite literal) pillow of resignation.

*Oh, today was unBosskly hot out.  I texted Big (who was at the beach) to tell him it was 105 degrees, and then had to text him an hour later when the thermometer read 108.  Dude, it was so hot, that Rish Outfield turned on his air conditioning.  And like his father, he would only use the air conditioner if the interior of his car were on fire.
Posted by Rish Outfield at 10:23 PM No comments:

My Voice on an old Drabblecast

Marshal Latham brought it to my attention that Drabblecast put out a Director's Cut version of 2014 episode "On A Clear Day, You Can See All The Way To Conspiracy" by Desmond Warzel.

There were twenty-two voice actors in the full-cast production, including me, and the astoundingly good Dave Robison as the main talk radio host, Mike Colavito.

I haven't words for how amazing this production is, my contribution notwithstanding.*  Afterward, Mr. Warzel (please, call him Desmond--Mister Warzel is his father) talks about the story, and I found out I've been saying his name wrong all these years.

*If I haven't praised him enough in the past dozen years--Norm Sherman is the most talented human being in podcasting.  But IS he human?

Posted by Rish Outfield at 3:42 PM No comments:

Yesterday my sister remarked to my mom that I am in the best shape she's ever seen me in (despite me being the complete opposite of fat when I was in my early twenties).  That made me feel pretty good, but then she started in on how Tom Hanks is a murdering pedophile, and the good feelings took a sharp exit.

Today, everybody up and went to the park, which means I could write, I could blog, I could dance around wildly in my underwear (or less), or I could record some audio.  Hmm.  Think I'll actually do the audio thing for a while.

It's over a hundred out today, and I went for a drive, then stood in the sun talking to a guy on his porch about action figures (yes, my life is damned exotic sometimes).  But now I'm sweaty and foul-smelling and uncomfortable, and the last thing I want to do is sit down and write.  But perhaps that's when you need to write the most--when it's hard.

Well, it's 1:16am and I only have 408 words written.  And it's glorious--I just don't care.  Maybe, if I manage to scrape together two shits, I can make it to five hundred words today, but hey kids, like that shirt that my niece said everyone in her junior high wore announced: 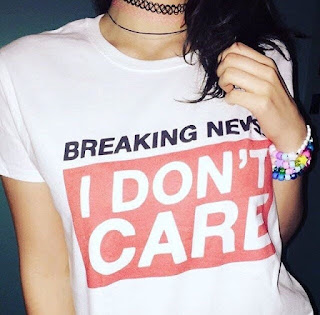 Today, I posted both a Rish Outcast (on here) and a Patreon Address (on here) and recorded about seventy minutes of an audiobook.  I'm gonna call that good enough. 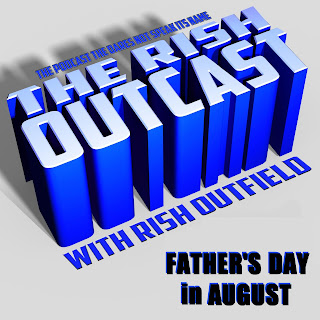 In this one, I present the second of my Praisden Carnival Trilogy (not that I've ever referred to it as that), "Father's Day In August."

Hopefully, I can start putting shows out regularly again this month (my goal is four in August). Wish me luck!

If you'd like to support me on Patreon (and get these episodes either early or on time), Left-Click HERE.

Posted by Rish Outfield at 1:31 PM No comments: