Not long ago, I had a conversation with a friend of mine about my writing career. I guess I should've put "career" in quotes, but let's not be mean, okay? He is an entertainment lawyer and film executive in Los Angeles now, and our dreams had been, ever since I met him, to go to Hollywood and make movies. I would write, and he would direct. Or produce. Or something.

Well, I moved out out there, a few years back, and accomplished very little in that arena. Then I moved away, my eyes forever glued to the rear-view mirror. I still want to be a screenwriter, but a few years ago, I stopped writing scripts and started to focus on short stories. My reasoning (and everybody who knows me has heard this a dozen times) is that a short story, when finished, is a completely WHOLE thing, a work of art in itself. A screenplay, however, is still unfinished, even when you finish it, because it's just a blueprint for a movie, an outline for a greater whole. And I was tired of writing scripts (that I thought were really good), only to have nothing to show for it afterward. It's not easy to hand a script to your uncle, when he asks for something of mine to read, and have him get enjoyment out of it.

Actually, I did do a bit of screenwriting professionally a couple of years back, but that was work-for-hire stuff, other people's ideas, and not what I'd call enjoyable, writing for fun. Stories are fun.

And I haven't really minded no longer being a screenwriter. I've focused on my podcast and on writing short stories, and I'm as creatively satisfied as I've ever been. Except that every once in a while, I'll have an idea, and I know it'll only work as a movie (or a short film, or at least an audio production). Most of the time when that happens, I shrug and say, "This one is for the Rish Outfield of an alternate universe, who still lives in L.A., works in the film business, and spends thousands on coke and hookers every month."

And then, I had this conversation with my friend. He was probably trying to give me a peptalk, or express disappointment in my life choices, or even just a backhanded compliment, but he told me, basically, that I was really talented, and might have made it as a screenwriter, but had given up. "Don't worry," he said, "Not everybody has what it takes to make it out here in L.A.. The film business takes a certain kind of person, with the kind of persistence you just don't have."

Well, that really bothered me. To be told that I could've been a real cop and I blew it was no divine revelation, but the truth hurts, as they say, and his words ate at me for the next few days. I thought about one of those Alternate Reality Rish ideas I'd had a few years back, and how I told it to Big and convinced myself--if not him--that it was a totally great idea for a movie, but it's a shame I don't do screenwriting anymore.

But why not? How hard would it be to write it down and type it up and send it to Ian and say, "See? I'm half the loser you think I am! And maybe half the writer you think I am too, but at least I wrote something!" And so, I did.

For the last couple of months, whenever I write, instead of stories, it's been this screenplay. And because that's what I studied in school, and virtually NOBODY I know also writes scripts and hence cannot criticize my work, it was way easier than I remember it being. And today, the 20th of August, I finished it.

I don't know if it's good or not. Big and I will have to talk in a future episode about taking a good idea and turning it into something mediocre, and that may well be what I've done. But at least I finished it. At least I still had it in me. And that makes me feel, if not good, at least that I'm not ready for the glue factory just yet.

P.S. Of course, it's totally possible that he was trying TO motivate me, and I went out and did exactly what he hoped I'd do. If so, he's the kind of clever person we need making decisions on movies, rather than all the committees and politicians and pencil-pushers out there.

Posted by Rish Outfield at 2:55 PM No comments:

Last year, I established some sort of precedent by taking my niece to an amusement park the Thursday before school started. We had a good time, and all this summer, she kept asking if we'd do it again. I didn't really want to, since I'd taken her to movies and plays really recently, but she wanted it to be some kind of tradition, and you know how weak-willed I am.

So, we went, the Thursday before school starts, and drove all the way up there (more than an hour's drive), and enjoyed ourselves, even though it was in the upper nineties and sunny the whole darn day. As the day ended, and we were passing signs that said, "This ride closes at 9:45," she asked me what time it was, and in pulling out my phone to answer, I realized I didn't have my keys.

Oh no, I'd lost my keys on one of the rides.

We stayed in the line while my mind scrambled for a solution. Did I lose my keys recently, or early on? Wouldn't I have worried about my keys on the ride that went upside-down? Did I even have my keys coming into the park?

I decided I must have left them in the door of the trunk when I opened it to get sunscreen, and either they were still there, or somebody had spied them and recognized the opportunity for a free joyride in front of them. Either way, I was too worried to stick out that line and get on another ride. We made our way all the way through the park, and across the parking lot, where, whew!, my car was still parked there. No keys, though.

I had a spare key, but it was at home, sitting by the door on a spare key ring, doing me a fat lot of good now. Why hadn't I gotten one of those magnetic keyholders to stick under the frame somewhere, so it would drop off when I hit a bump and be gone when I really needed it?

The car doors were unlocked, and I began to suspect that the reason for that was that I'd closed the keys in the trunk, and thus been unable to lock the car. Pretty fortunate, really. Because my trunk won't open except for with a key, I thought I was screwed, but when I put the back seat down, I saw a little crawlspace there into the trunk. I gave my niece my phone to use as a flashlight, and she went spelunking until she found the keys.

I was relieved. It would've been mighty headachey to have to call my mom or sister and have them get my spare key and then drive sixty miles to meet us just so we could also drive home. As a reward, I took my niece back into the park to go on one more ride (she chose the one we'd been in the line for last anyway), and then out to get horribly overpriced ice cream at Dairy Queen.

Still worth it, though.
Posted by Rish Outfield at 2:54 PM No comments:

As Long As You Will Always Be My Biggest Fan 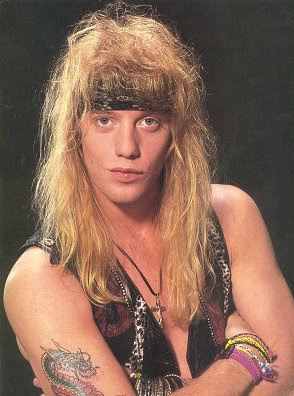 I wrote this entry up once already, but lost it when the program crashed. And I considered not even bothering a second time.

See, I wasn't a huge fan of Warrant growing up. I never had one of their albums, or owned a Warrant t-shirt, or saw them in concert, or had my way with a babe whilst listening to "Cherry Pie."

Heck, I didn't even GET that "Cherry Pie" song, except that some of my classmates seemed to really like it, and give it significance far beyond my ken.

But I did write a screenplay once in which the main female character hears her first bit of human music . . . and that song was "Heaven" by Warrant. And while everybody around her dismisses the song as sappy, hollow, trite crap from an era of excess and kitsch, she thinks it's simply wonderful.

So I had to say something. I loved that song when I was a lad. And I love it now. And Jami Lane wrote and performed it. So I tip my hat to him and his untimely death.

No matter what your friends say.

Rish "Better Than Winger" Outfield
Posted by Rish Outfield at 11:33 AM No comments: