The Podcast That Dares Not Speak Its Name 15: Skipping

Recently, there was a contest of sorts over at the Paradise Lost forums, encouraging writers and would-be writers. 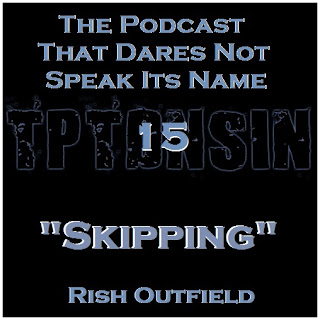 I wrote this story for two reasons: one, to support fans of the show, who were influenced in a positive way by the Dunesteef.  And two, because why not write another story?  Why not . . . that would be a good motto to have.

If you wanna download the file, just RIGHT-CLICK HERE.

Nephew of the Year

My eight year old nephew ran in this morning, with some kind of offering to me.  It looked like a treat, a jellybean, and he held it out, but with such a strange expression, that my Spider Sense couldn't help but start tingling.  "What's that?"

"I don't get it," I said, because usually my nephews come into the room to steal my candy (which I used to have troves of in various drawers and hidden caches).  This was the first time the role was reversed.

"Just eat it.  See how it tastes."  And there was a barely-concealed amusement in his face and voice.

"Nah, I'm not really a jellybean sort of guy."  This is true.  About five years ago, somebody gave me a baggie of Jelly Bellies at a Dionysus festival, and it's still two-thirds full on my desk somewhere (buried under receipts, broken toys I'll never glue back together, and stories I wrote while Bush was still in office).

He sighed, and said, "We got these candies, and you never know if the flavors are gonna be good or bad.  Sometimes it's bubble gum or lemon, but sometimes it's throw-up, dirt, or diarrhea.  Now will you eat it?"

I think I'm gonna lock my door from now on.
Posted by Rish Outfield at 9:15 PM No comments:

Rish Performs "Night of the ZomBEES" by Kevin David Anderson

Years ago, Kevin David Anderson published a book called "Night of the Living Trekkies," and he's never let us forget it.  But now he's back, with a brand new work, entitled "Night of the ZomBEES," and yours truly narrated the audiobook. 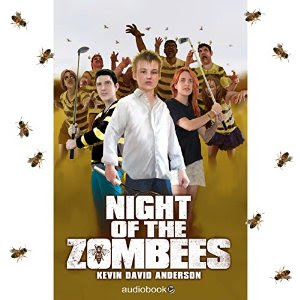 "ZomBEES" tells the tale of a couple of James Bond-loving teenagers who live in a town that so love honeybees that they have a yearly festival dedicated to them.  But the local mad scientist creates a sort of mutated mega-bee that once loosed, turns the townpeople into mindless horde of zombies . . . dressed in homemade bee costumes.  So, Shaun, Toby, and the world's nastiest redhead must team up to survive the plague, and see if they can't figure a way to make things right.

Kevin has always been a friend to the Dunesteef, and seeing his success gives me encouragement with my own work.  Maybe it’ll do the same for you.

You can buy the audiobook RIGHT HERE at Audible, or, if you're still not convinced, you can listen to the first three chapters at Kevin's website: www.kevindavidanderson.com/ZomBEEs.htm
Posted by Rish Outfield at 11:23 AM No comments:

Rish Outcast 46: Ask Me No Questions (The Final Frontier)

Here I am, answering more of Tom Tancredi's probing questions.  Since recording these episodes, I discovered that Tom has a twin brother.  Maybe I ought to make a list of questions for him to answer ("Number 3: Have you ever hurt yourself or gotten some action, only to find that your brother felt it at the same time?"). 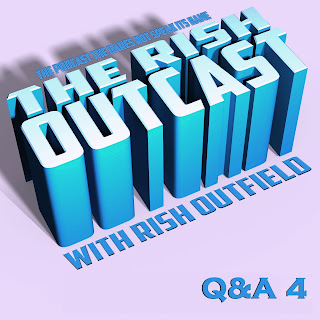 You can also Right-Click RIGHT HERE to download this episode to your infernal device.
Posted by Rish Outfield at 11:06 PM 1 comment: