I Perform "Night Games" on Pseudopod

So, not at all long ago, Shawn Garrett asked if I could get a story recorded and edited in time for this week's episode of Pseudopod: The Horror Podcast.  I always say yes to those guys, and the story I ended up doing was called "Night Games" by Aeryn Rudel, who has the distinction of having an impossible name to both spell and say.

It's the story of a baseball pitcher who ends up playing against a batter who's more than a match for him . . . a vampire batter.

The story is all kinds of good, and I had to pretend to know more than nothing about baseball, which is a bit of a stretch for me.  Rudel, however, said I was a perfect fit for his story, what with my name being Rish and all.

At least that's what I think he meant.

Exciting news, for me anyway.  I got a work-in-progress from my friend regarding the cover art to my next book.

So, cover art to my next story, I guess.

Doesn't sound as catchy as "book," does it? 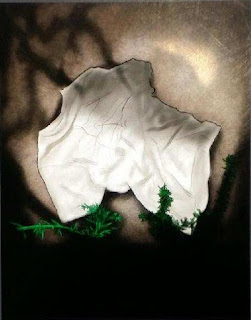 Book.  My next book.

On a roadtrip, I got lost and decided to podcast while trying to get back to where I was going.  So I decided to talk about the horror film THE BABADOOK.  Enjoy? 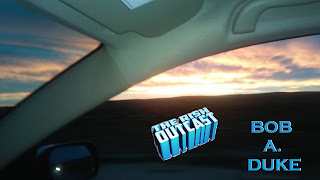 If you feel up to downloading the episode directly, just Right-Click HERE.
Posted by Rish Outfield at 1:41 PM No comments:

Rish Outcast 50: Sequel of a Sidekick

Say kids, you remember "Birth of a Sidekick," the Western adventure I once shared with y'all?  Well, I wrote a sequel to it!  And what's more impressive . . . I actually published it.  What's more, Dave Krummenacher provided this (once again) excellent cover art: 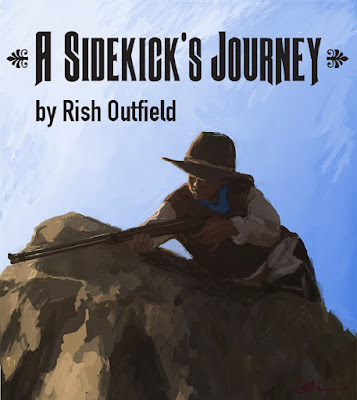 "A Sidekick's Journey" is the second tale in what somebody somewhere is calling The Sidekick Chronicles, and is considerably longer than the first story, which I wrote in 2005.  This one takes place a few weeks after the first story, and continues to chronicle young Benny Parks in Trueno, Arizona, where he was left after the death of his mentor.  Though there are challenges in his life, it looks as though Ben may get a second chance.

It was a pleasure to get a chance to visit Ben again, and flesh out his world a bit.  If it's a pleasure to read as well, we may check in on him again before ten more years go by.  I'll try to come up with something. 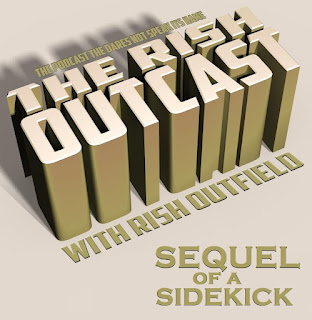 This episode of the Outcast talks about the book, and is relatively spoiler-free.  You can, of course, go o'er to Amazon and purchase "A Sidekick's Journey, right HERE.

Or, if you really wanna be my friend, treat your ears to the audiobook performance, over on Audible.com at THIS LINK.

Well, what a ride this has been.  "Jondelle" is the tenth and last book I signed up to narrate in E.C. Tubb's "Dumarest of Terra" book series.  And it is, surprisingly, the best of them.

Oh, there's the same elements in this book as in all the others: Earl Dumarest is forced to do battle gladiator-style for the pleasure of the rich and indolent, there is betrayal by a supposed-ally at the end of the book, he describes his homeworld with the same word-for-word explanation as the other stories, he manages to survive events that handily kill most of the people around him, and two women fall desperately in love with him, using his name with an exclamation point at the start of most of their sentences. 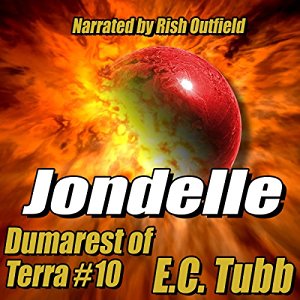 But the plot of this one was at least different: Earl meets a woman and her little boy, who is promptly and brutally kidnapped.  And Earl vows to find the lad, Jondelle, and bring him safely home.  He gathers clues, and later a team, to accomplish this goal, and searches a dangerous, savagely-backward world for the lost boy.

It is with mixed feelings that I close this chapter of my audiobook adventures.  I mean, something had to have been wrong with either me or the books for me to be (quite literally) two years late in completing this audiobook, after I believe I managed to get either four or five books done in 2013.  But this one went so well (all things considered), that I imagine I'll miss Earl Dumarest, and his never-ending search for the long-forgotten Planet Earth.  Wildside Press has already assigned other narrators later books in the series, which I can rightly assume was due to the lateness on my charges, and even if my readings are substantially better than my replacements' (which is doubtful), is it worth the lost income of, altogether, many fives of dollars?

This is the link to the book over on Audible: www.audible.com/pd/Sci-Fi-Fantasy/Jondelle-Audiobook/B01LBFPB24  Scoop it up, if you're of a mind to.

My abilities as an audio storyteller have certainly improved since narrating the first book in 2013 (I was saddened to discover that chirping crickets could be heard throughout the production of one entire book . . . but not saddened enough to re-record the whole project).  But I have also learned a thing or two about story structure and writing a series with each of these books I have tackled. 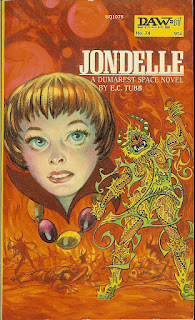 Oh, and I simply have to include the cover art to the paperback version of "Jondelle" I did my reading from.  Of the ten books I've narrated, this one easily has the worst cover.  In fact, I'd not be surprised to discover it was the worst cover to a book EVER.

Makes me feel a bit better about some of mine.
Posted by Rish Outfield at 10:57 PM No comments: