Is he strong?  Listen, bud.  He's got radioactive blood.

2012 marked the fiftieth birthday of the Amazing Spider-man, my favorite superhero.  I meant, for months, to blog about my love for this character, and why he means so much to me (being a fictional character, it's kind of strange how much I see him as an actual person, a friend even), but never felt ambitious enough.  I knew it would take a while, and even if I wrote for hours, I would leave something out, such as the humanity of the character, the relatability of Peter Parker, his unique look and mannerisms.

But then I realized: if I just recorded my thoughts in front of a microphone, I could say whatever came in my head, and be done in fifteen minutes, whereas it would take a day or two to say as much in a blog.

This still ended up taking a while longer than I expected it to, but hey, Spidey's worth it. 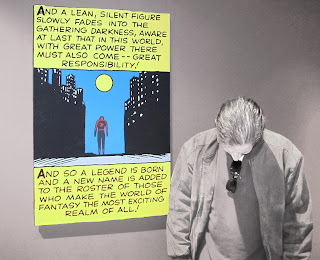 Posted by Rish Outfield at 4:10 PM No comments:

I was sitting at Der Weinerschnitzel today, having a chili dog and mulling over my failures in life, when a family came in.  I glanced over at them, then went back to eating.

But then I paused.  There had been something wrong with the boy.  I looked over once again to see a little boy, around five years old, standing in the line.  He was blond and cute and antsy, stomping his feet to shake off some of the snow . . . but there was something on his forehead.

I stared harder, willing my eyesight to improve somehow.  There was a brown splotch on the boy's temple, right above his eyebrow, about two inches square.  At first I thought it was a bruise, but it was too red for that.  Some kind of growth, maybe?  A cancerous growth?

But no, I realized that what it had to be was a birthmark.  A big brown puzzle-piece shaped birthmark, smack in the center right of his forehead.

Holy moley, kids.  What would life be like to have a big stain like that on your face, not only in childhood, but for the rest of your life?  What nicknames would you get, what beatings would you encourage, what complexes would you develop, noticing that the first thing anybody notices when they look at you was the big discoloration on your temple.  This poor child.

And I started to think of my own life, and how miserable I've been for so long, finding things to complain about even on days when nothing bad happens.  Sure, I am a bit of a failure in life.  Sure, I lost my job again yesterday.  Sure, I'm somehow both skinny and fat.  Sure, no woman will allow me to touch her, and when I've done it anyway, they've twitched and shook as though I'd dumped on some fire ants.  Sure, I have very little money right now.  Sure, my car's heater has broken, but I still owe nearly two thousand dollars to repair it from last time.  Sure, what little talent I've been given in this life I have squandered by being too afraid of rejection to ever put myself out there.  Sure, I will die alone, and soon.

As I finished my meal, my heart was filled with a warmth that even the frigid temperatures outside (and in my car) might not extinguish.  Life is hard, yes, but it could be so much worse.  I may have a lot of problems, and even more defects as a person, BUT AT LEAST I DIDN'T HAVE A BIG DARK BIRTHMARK ON MY FACE.

With that kind of freedom, I could start again.  I could move away and begin a new life, and make of it as I wish.  I could approach a pretty girl and say something to her, confident that whatever her reaction, she wouldn't be gazing in nausea at my forehead.  I could get a job somewhere, start saving up, get a new car, and let it take me wherever my heart (my newly-warmed, newly hopeful heart) might wish to take me.

I stood, straighter than before, and moved toward the exit, glancing at the poor, saintly child with tears in the corners of my eyes, wishing I might be able to thank him, encourage him, tell him that although things are tough, they--

Up close, I saw that it was no birthmark.

It was a temporary tattoo of a Pokemon he'd applied himself, now fading almost to unrecognition.

I haven't posted on here in quite a while.  I've been really busy, and both my writing and my podcasting has suffered.  I didn't even get a chance to do my yearly viewing of LOVE ACTUALLY, which I'm sure my buddy Jeff managed to do this week.


Even so, I still watched it in my heart. 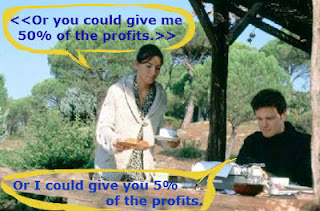 Posted by Rish Outfield at 11:41 PM No comments:

I was taking my four year old nephew to the store today to look at toys (it was actually to pick up sour cream and hashbrowns, but who's counting?), when he said a disturbing thing.

He wanted the Skylanders game, and I told him it was very expensive, so he'd probably be better off asking Santa for it.  Then he said, "Santa Claus isn't real.  He's just a man in a costume." 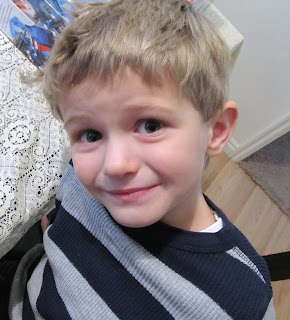 Well, that really gave me pause.  That a four year old would say such a thing doesn't seem natural.  Four year olds should believe in all myths: unicorns, the Tooth Fairy, the Easter Bunny, wishing on a star, true love, every time a bell rings an angel gets his wings, cheaters never prosper, the earth is six thousand years old, if you swallow a watermelon seed one will grow in your stomach, Miley Cyrus has talent, breaking a mirror gives you seven years bad luck, four leaf clovers give good luck, people with red hair are evil, if you step on a crack it'll break your mother's back, there's a pill that can make your unit grow, Tom Cruise marries for love, someday your prince will come, and there are no monsters--no real ones.

I tried to skirt around the issue, telling him that Santa comes every year, and he did when I was a boy too, and who else brings us those presents if we've been good, to millions of boys and girls?

Finally, I sighed, and realized that all the chatter around me must have been true, and that my little nephew ceased believing . . . because Obama was re-elected President.  Sigh.
Posted by Rish Outfield at 7:47 PM No comments: