Marshal and I Review Solo: A Delusions Story

Though sometimes it seems we were the only ones, Marshal Latham and I saw SOLO: A STAR WARS STORY and spoke about it recently.  Marshal also dug out our predictions of what would happen in the movie, so we could see how right we were. 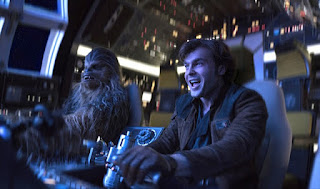 I do complain about the one character I hated in the movie.  Guess I should do that more often.

In an extremely noisy environment, I present a story from the Nineties about a little boy and his ailing grandfather. I talk about it being dated (and the ubiquity of cellphones), but it's up to you whether it actually is. 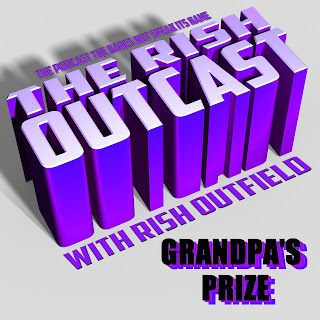 I tried to record this one at the lake again, and ended up getting turned away and rained on, but I hope you like it anyway.

Support me on Patreon HERE.

Logo by Gino "The Chimpanzee" Moretto
Posted by Rish Outfield at 5:01 PM No comments:

I recently got to go back to Santa Monica, California for the first time in a decade or so.

When I got out of school and moved to Los Angeles, I had (pretty close to literally) no money.  I learned to do, for leisure activities, things that cost very little, or things that cost nothing.  One of the first things I learned to do was to go to the 3rd Street Promenade (the street-long collection of shops, boutiques, and touristy places three blocks from the Pacific Ocean), where I could park for free in one of their multi-level garages, and look around, go to the beach, or cleverly . . .

. . . I could go to the Barnes & Noble on the corner, pick up a book or magazine, and leaf through it until it was time to go (or buy something), to keep from having to pay to park.

I loved the Barnes & Noble.  It had three levels, and there were escalators in the center of it, but instead of one side being to go Up and the other to go Down, they made you circle the entire floor on each level, just to eff with you.  It was kind of a magical place for me, since I ran into a couple of celebrities there (including a certain muscular Austrian I do a fairly unpleasant [but amusing?] impression of).

I wrote a story called "House of Ideas" that was set there.  Maybe not my finest work, but they say it's among the twenty-three best "magical toilet stall" tales ever run on the Dunesteef.

Well, after a dozen years, I went back this week, and found a rather sad sign on the window (as well as a rather empty building behind said window).  The Santa Monica Barnes & Noble has closed. 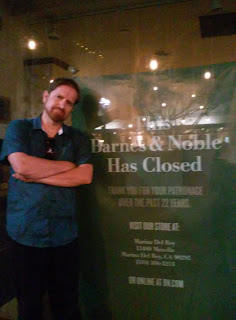 Of course, that is the way of things (the way of the Force).  Pretty soon, my local Toys R Us (and yours as well) will be closing its doors* and eventually, every place (and person) I've ever liked, visited, or loved will also be gone.  I ought to get used to it.

But it's nice to get melancholy about stuff like this; it's because I had good memories associated with the person or place that makes it noteworthy. 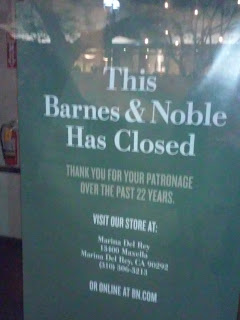 Guess I should find a new place to write a story about.  Maybe a strip club or two?

Rish Outfield, Once Actually Bought A Book In Barnes & Noble

*And I wrote a story that took place there as well: a Holiday-themed zombie apocalypse story where the town's survivors go in search of presents on Christmas Eve and one of them ends up getting trapped in the back room by the living dead.
Posted by Rish Outfield at 1:18 PM No comments:

I Perform "Water in the Desert" by Abigail Hilton

Sometimes I feel like one of those actors who were blacklisted during the McCarthy era, once riding promising careers, now professionally untouchable.  But Abigail Hilton is like Kirk Douglas to my Dalton Trumbo., keeping food on my table till this administration gets replaced.  Hopefully, like Douglas, she also lives to be a hundred and two.

The most recently-published Hilton piece I have narrated is called "Water in the Desert." 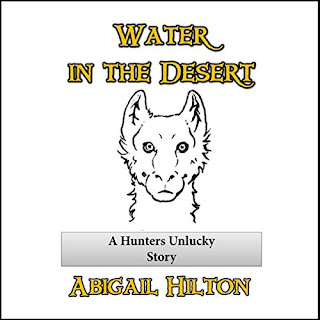 Set in the same universe as "Hunters Unlucky," WIND takes place seven years later, with the characters of Sauny and Valla now grown and having an adventure on their own.  Because I had voiced those characters as children, I pretty much got to come up with new voices for everyone in this story, which is fun.

Hopefully, the story (and my reading) is fun too.

Check it out, if you're of a mind to.  Here's the link, over on Audible.
Posted by Rish Outfield at 10:36 PM No comments: 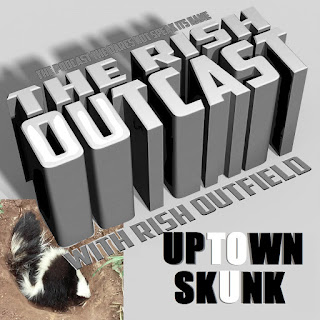 Continued from last show, I go (by myself, of course) to my family cabin, and look around. I find a smelly surprise waiting for me. Can you dig it? 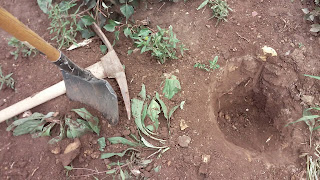 Note: One of the five ideas I came up with on this trip I DID turn into a story. Just not a very good one.

If you want to download the episode directly, here's a LINK to Right-Click on.

If you want to support me on Patreon, here's THAT LINK.