I saw a bus stop poster for the 3-D re-release of STAR WARS: THE PHANTOM MENACE the other day. They've been pushing it quite a bit around here, hoping to make the kind of money LION KING's reissue did (or better yet, the 1997 reissue of STAR WARS). 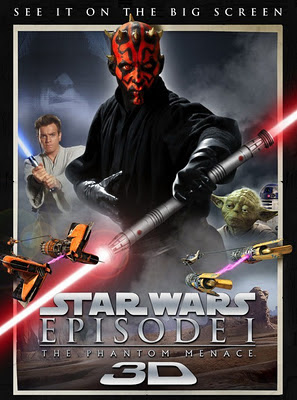 Everybody's seen that flick, and I've made it more than clear what I think about the frickin' Prequels, and yet, seeing that poster, the first thing that went through my head was: "Wow, I think I'll go see that. I really liked that movie."

Posted by Rish Outfield at 12:00 PM No comments:

Yesterday, I made a little business transaction with a stranger in a parking lot (no, not THAT kind of business transaction, but one much lamer), and I had to pay in cash (ditto). So, I scraped together all my money and had to borrow the rest, and met the guy in the designated area. I handed him the money, and took my purchase to my car.

When I turned around, he was standing next to me. "Hey," he said, "there's something wrong with a couple of the bills."

Immediately, I knew what he was talking about and sort of laughed it off, "Yeah, I've had those for a long time."

But he wouldn't laugh along. "Look at these twenties," he said, showing me the three pre-2000 bills with the smaller circles and less color. "The backs don't match either." 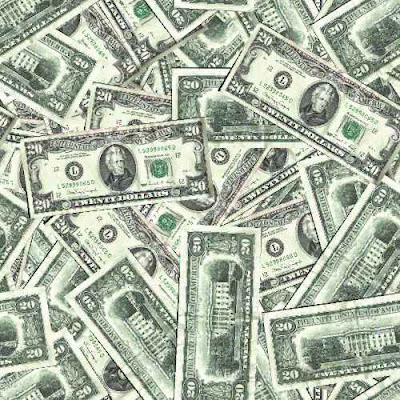 True enough, he turned them over and they didn't have the same art on the back that the new bills do. America has been changing the design on their currency little by little, making them more complicated and harder to counterfeit, and when the new twenties first hit, I remember people saying they looked like Monopoly money. I guess it's been long enough this guy got used to the new ones, but I'd never heard somebody think the old ones looked fake before.

For a minute there, I actually thought the guy was going to refuse to take them, which would've been a headache. But then, maybe I deserve a headache, for trying to use currency from the bloody 20th Century. Sad old man.

Rish "Monkeybags" Outfield
Posted by Rish Outfield at 10:22 AM No comments:

A few years ago, my Irish friend John said something that has stuck with me ever since. He said, "I would probably kill myself, except I really want to see what happens next."

It was an odd thing to say, and I never really knew if he was joking around when he said it (I suspect not), but it came to mind again and again. During dark moments, I have thought of his words, and wondered about what I'd miss out on if I wasn't around. And thusfar, dammit, I'm still here.

One thing I would've missed out on was 2011's "American Horror Story," an honest-to-Hitchcock Horror series on cable's FX Network. Created by the men behind FOX's equally horrific "Glee," it was a haunted house series about a dysfunctional, nearly-broken family, and what happens when the two mix. And it was, honest-to-Punky-Brewster, unlike any show I've ever seen. 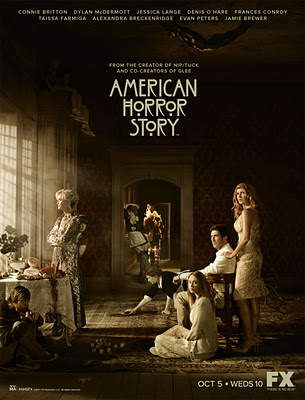 And I bloody loved it. I watched it with my friend Jeff, lagging behind the actual airdates, and while I know I enjoyed it a hell of a lot more than he did (sometimes I got the impression he flat-out loathed it), he kept on watching it with me until we reached the end just this week.

I guess he felt he owed me after THE FANTASTIC MR. FOX.

But regardless, I really dug the show, and admired the skillful way they kept the family members from realizing the house was haunted, and introduced some really surprising twists, and some truly wonderful black humor.

Oh, and the show was legitimately scary. Something I quite appreciated.

I'm glad I didn't miss it, even if my friend feels differently.

Rish "You're All Gonna Die In There" Outfield
Posted by Rish Outfield at 11:55 PM No comments:

The other day, I took my niece to the library to check out a couple books. While we were there, I spied a five dollar bill on the floor by the DVDs and Books On Tape. "Hey, free money," I said to her, "Looks like we can go ice skating for free."

She just looked at the money, then said, "I'd better not."

"Why not?" I asked, trying to figure out her reluctance.

"It is now, congratulations," said I.

Still, she did not move. "I don't want to get in trouble."

She finally did, and said, "Well, shouldn't we turn it in? In case someone is looking for it?"

"If it was a wallet, or car keys, or a kidney or something, sure," I said, "but not for cash. There's no way to identify it, and nobody's going to ask if somebody turned in a five dollar bill."

She pocketed the money, but I could tell she still had reservations about it. We tried to go ice skating, but they close early on Thursdays, apparently (either that or it's a conspiracy to keep me from exercising).

I forgot all about it until the other night, where my sister mentioned that she had chastised her daughter for picking up the money. She has an Adrian Monk-like obsession with germs, so I assumed that was her reasoning. "What, because it had been on the floor? Or just because money is dirty?"

"For taking money that didn't belong to her," my sister said.

"It didn't belong to anyone," I said, "it was dropped on the floor."

"Well, she should have turned it in, or left it there."

I argued with her for a moment about the unlikelihood that someone would even consider going to the Lost and Found for cash, and probably didn't even know it was gone, but in her mind, it was dishonest of me to tell her kid the money was hers if she found it.

I guess she never heard that ancient teaching of the Buddha, the one that ends with "losers weepers."

Rish "You Owe Me Five Dollars" Outfield
Posted by Rish Outfield at 10:56 AM No comments: