My buddy Jeff has two traditions he follows every Christmas. One is that he and his wife go somewhere on Christmas Eve (or Christmas Eve-Eve) and buy each other a little gift. His other tradition is, after the presents have been wrapped and placed under the tree for the next morning, to watch LOVE, ACTUALLY with his wife together.

They do it every year, and I envy the hell out of it. There's only a handful of movies I love as much as I do LOVE, ACTUALLY, but not having a wife (or anything remotely close to one), my viewings of the movie are always solo.*

Jeff just emailed me to mention that they finished the flick--it was as good as ever--and he's now on to bed. So I figured I ought to at least TRY to watch it, now that I've wrapped my own presents for tomorrow.

I love something new about the flick every time I watch it, and laugh at a new line I never noticed the other times through ("He now spends all his time up in his room." "There's nothing unusual about that. My horrid son Bernard stays in his room all the time. Thank goodness."). I'm a pretty tough sell when it comes to movies (at least more so than everybody except my dad and Big Anklevich), but they've really got me with this one.

It would be nice to develop a couple new traditions--preferably non-solo ones--but this is one I don't mind repeating from last year. 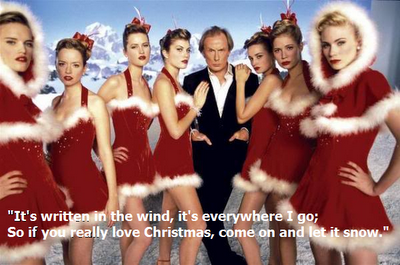 *Which might be a good thing; after all, how attractive can a man be to a woman when he consistantly bawls throughout what is universally-recognized as a Romantic-Comedy? I believe they even address it in the flick, when Emma Thompson says, "No one's ever going to shag you if you cry all the time."

The local Eighties radio station keeps playing this promo that sort of creeps me out. It goes, "Ho, ho, ho, kids! This is Santa Claus here, reminding you in this holiday season to remember the Baby Jesus. The Baby Jesus taught us to love one another as we love ourselves, and thinking of him will help us all to have a merry Christmas. Ho, ho, ho!"

I find this radio ad both vexing and extremely annoying. Look, I know that Christmas is a religious holiday, and that religious folks get upset that it has been secularized. But isn't Santa kind of the anti-Jesus? The representation of all the commercial and non-denominational aspects of the holiday? Isn't Santa Claus Jesus's Lex Luthor or Doctor Octopus? Or at least the equivalent of Toyman or the Shocker.

It may not be Israel and Palestine (as I have previously asserted), but that one holiday icon should be used to invoke the name of another holiday icon just seemed wrong to me. Despite whole church and state thing, it would be one thing if the station's general manager got on the air and told people to keep in mind that it's Jesus's birthday, and He's the reason behind all the hoopla. But to have Santa do it (or, more accurately, somebody pretending to be Santa) and telling KIDS to keep in mind that the season is about the Baby Jesus . . . well, I just have a problem with that.

Years ago, I knew a woman who would constantly pray to the Baby Jesus. And that just plain bothered me. Maybe it's all nonsense, or maybe it's just the thought that counts, but if Jesus was really the Son of God and lived like the stories say, then He sure as hell isn't a baby anymore. Right?

Or is Baby Jesus a different entity altogether, like Superboy and Superman are (at least according to the lawyers DC Comics employs so they don't have to pay royalties on "Smallville")?

Regardless, Fake Santa telling us what Baby Jesus taught is just false all-around. The Baby Jesus didn't teach us anything. He was a baby. Oh, going by all the carols and pop songs, He was an extraordinarily well-behaved baby . . . but He wasn't giving devotionals, self-help seminars, and lecturing at community colleges. Not even on carpentry.

I know it's a little thing, and wouldn't have merited being mentioned (still doesn't), but I heard the promo again and again on the radio, and figured I should say something, just to get it off my chest.

We can just move on now.

P.S. "Hey kids, this is Artoo Deetoo. I know you're all excited about THE PHANTOM MENACE getting re-released in cinemas in a few weeks, but let me remind you that Spider-man turns fifty years old in 2012, so this really should be his year. And remember that Spider-man taught us, 'You either die a hero, or you live long enough to see yourself become the villain.' Have a happy new year."
Posted by Rish Outfield at 8:50 PM No comments:

Captain America co-creator Joe Simon died today. He made it to ninety-eight, and lived to see a really solid film made from his most famous creation. In recent years, I've really grown to love Cap, and I hope Joe got to interact with some of the millions of people like me over the years. 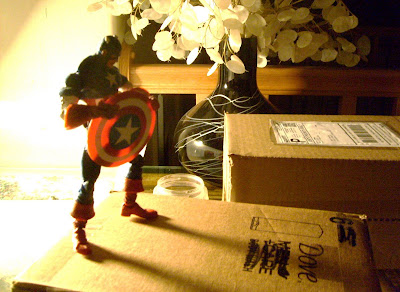 I don't know if you have a Del Taco where you live (probably not in the UK or Australia, right?), but we have 'em all over around here. It's delicious, cheap food, and my cousin and I eat there pretty much every Tuesday night. Also, the restaurant in L.A. I probably went to the most was the Del Taco on Washington and Motor (technically Culver City, I suppose). Like most fast food franchises, their drinks are unforgivably overpriced, but you can always get a complimentary water, to save a couple bucks.

Of course, those restaurants make a killing on soda, and some Del Tacos have an ingenious way to get you to buy drinks anyway. For example, the aforementioned L.A. location had water that tasted like it came right out of the septic tank, and that worked well for them.

Today, I took my nephew to our local Del Taco, and they had an even cleverer way of getting us to buy drinks. I got a drink for me and a water for him, but then found that no water was coming out of the dispenser. I asked the girl behind the counter, and she said, "Oh yeah, that's broken."