The Chilling Sound of Your Doom

Can we "spring forward" soon? 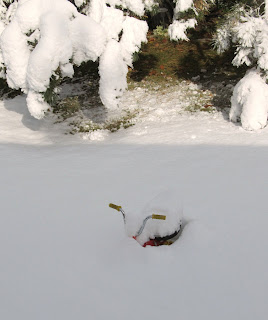 I know some of you out there delight at images such as these.  But then, so did the Nazis.

Posted by Rish Outfield at 12:57 AM No comments:

My Waste of Time

Right about the time our third episode of the Dunesteef hit the podosphere, a friend of mine suggested that Big and I were wasting our time with this particular endeavor. He was trying to make a point--a positive one, I'm sure--but I took it badly, and have never, ever forgotten it. As far as I know, he never listened to the show again, and he's the kind of guy who would've told me if he did.

But here we are, more than four years later. We're st--wait, let me leave Big out of this for a moment. I'm still doing the show (two shows now), and while there have been a couple of moments where we came close to shutting it all down (even going so far as to record a final episode a year and a half ago), I've never completely given up on the idea of podcasting as a valid use of my time. It fulfills a dream of mine, which was to be a radio host or DJ, and also provides me with a creative outlet every single week. I get to drive over to my friend's house and do battle with his family over his attention, and hang out with Big, go on walks, and try to make him (and an invisible audience) laugh.

But it is a great deal of work, and as my credit card statement reminds me, not extraordinarily lucrative. I don't know why, but for every minute of finished podcast, it takes several minutes of recording, transferring, editing, saving, transferring back, levelizing, and problem checking, and no matter how much time I assume something will take, it always takes more. Plus, because I get a kind of creative fulfillment from this work, I often ignore my other creative endeavors in favor of it, or simply have little energy (or time) to pursue those.

We--sorry, I--decided it would be a worthy pursuit to record thirteen shows for Halloween last month, and put them up in the days leading up to the 31st, as a tribute to my favorite holiday, and hoping that it encouraged people to toss us a few spare dollars. It too ended up being way more time-consuming than I ever would've guessed, stopped being fun at one point, and there were times when I wanted to throw my hands in the air and forget the whole thing, since nobody was going to care either way.

I didn't quit, in the end, but I sure as hell burned myself out with that ordeal, and haven't edited anything since then.

Also, last night we had our very first in-house guest on the show, and it ended up taking us into the wee hours of the morning to do all the recording, even though we still left a couple of things we'd planned to get to on the to-do list. I had to try and get some real dollar-value work done this morning, and it was hard to manage with less than five hours of sleep.

(do you have a point? my inner Donald Duck Devil is asking)

The point is, I sometimes wonder if it is a waste of time, as my friend suggested. And then I get a letter like I did today. A listener in New York wrote us, talking about the aftermath of Hurricane Sandy, and our thirteen episode marathon helping keep him sane during the insanity that followed.

If I can be so crass as to quote from his message:
"Yesterday...I borrowed [a] bike to traverse across the East River and get to the office. It was a ghost town south of 39th Street. While I'm going through a scene of a post-apocalyptic city, I was listening to episode after episode of "13 Nights of Halloween." There are people filling jugs of water from fire hydrants, crowds of people surrounding libraries (the only locations with WiFi) and the streets are dark and abandoned, no lights from the stores or the lamps.

"I know it's hokey, but the normalizing conversation that Rish and Big were having kept my mind focused on the fact that this catastrophe was temporary, not the usual, and that reality would come back online soon."

He said that he wasn't able to dress up for Halloween this year or go to any parties, but listening to us talk about those things made him feel like he had. We made him think of times past when there were more trivial concerns and trials on his mind, and hope that those times came again. "Listening to Rish and Big," he said, "I *felt* like I was a part of that world. For whatever weird time, I *lived* through them and their experiences, which beats anything of mine."

This guy, who we've never met, said we were his favorite podcast, and when he really needed it, we were there for him.

Today, I don't feel like I wasted my time. Today, I'm ready to work on the podcast again.

So, I had various plans for Halloween night, a play with my uncle, a scary movie with my sister, trick or treating with my nephews.  But none of it ended up happening.  I put on a costume to greet the children who came to my door, but the stench of death (or maybe it was failure, they smell so much alike) kept them away.

I was bummed out that my favorite night of the year was pretty much squandered with blogging and work.

But ah well, somebody's got to burn in hell, to make y'all's paradise seem sunnier.

Regardless, I awoke this morning to some good news: another of my short stories has been podcast, and is available to listen to.  This one is called "The Visitor" and is presented on the Midnight Circle horror show.

I wrote "The Visitor" about a decade ago, as part of a contest for a now-defunct horror website.  I didn't win the contest, and the feedback I received was . . . wait for it . . . that the story was predictable.  It tells the story of an old woman who returns to her woodland cottage to find a note from the Grim Reaper.

I thought it would be fun to write the story in Spanish, for my grandmother who was ill at the time.  I found that however limited my writing skill is in English, it's way more so in another language.  The podcast version is read by William Macrae-Smith, who kindly stuck to the English text.
Posted by Rish Outfield at 3:38 PM No comments: