I first saw TRAINSPOTTING in 1995.  I remember the experience fairly well.  First off, I couldn't understand a darn word being said, and it was the very first time I ever used the Closed Caption option on a television to read the dialogue in a programme.  Secondly, the poor sod who soils his girlfriend's bed?  The lesson I took from that scene was that if you didn't have sex for an extended period of time, that would happen.

The third thing was this sense of superiority I felt, thinking I was so much better than these people, with their disgusting habits and laundry list of sinful activities.  I could look down on them in 1995, and I would look down on them when the trump blew and they all burned in ever-lasting hellfire.*  Sickening junkie pervert losers. 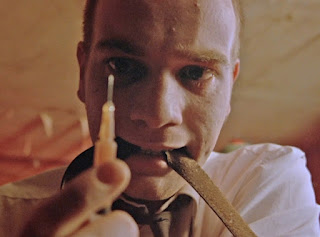 Well, here it is 2012, and I just watched TRAINSPOTTING for the second time.  And it was a remarkably different experience for me.    First off, I understood everything, even the slang, and even Robert Carlysle's crazy rants.  My constant exposure to BBC television and the Scottish movies Jeff has made me watch has opened up my ears to various previously-foreign dialects.**  Heck, I believe the VHS version was even the American dub, where they attempted to make the dialogue more palatable for folks in Lawrence and Des Moines.

Secondly, well, yeah, I've had it explained to me.

Thirdly, though, was what a remarkable change in attitude I've had over the past near two decades.  In watching it again, I actually found myself envying Renton, Sick Boy, Spud, and the others.

Yes, they are heroin-addicts, but they have drive, they live for something, they wake up in the morning with a goal, a tangible, real goal.  And it's something they can achieve.  They live for something, have an obsession that they'll do anything for, which I really don't have.  The lifestyle seemed kind of romantic, worst toilet in Scotland notwithstanding. 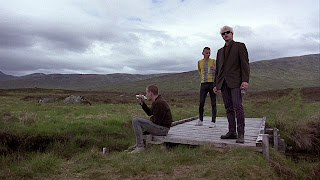 Plus, I really responded to the soundtrack this time, and didn't even notice it back then.

I'd be crazy if I said the dead baby scene still didn't bother me, but I still thought, "Heroin.  That's something I never considered.  But I should."  Why not?  Could it possibly screw up my life any more than it already is?  And hey, maybe I'd have something exciting to look forward to every morning (or more likely, afternoon) when I woke up.

*Okay, this is a huge exaggeration.  I may have been a different type of person in those days, but I was never a fucking asshole.

**All those faces were so new to me when the movie was new (or "new," since I saw it on video), but so many of them are familiar now.

On Monday, Big and I recorded an episode of the Dunesteef to accompany a story by Michael Anthony called "Remember Mars," in which an elderly ex-astronaut is spending his twilight years in a facility in which nobody recognizes that he landed on Mars. In fact, the people around him don't believe that America even actually landed on Mars. It's a sad, melancholy, depressing, but ultimately uplifting little tale, and afterward, Big and I talked a bit about the space program, the space shuttle and Apollo missions, and how nobody really cares about that sort of thing anymore (Curiosity notwithstanding). 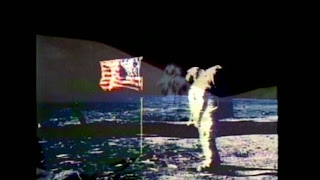 We talked briefly about Neil Armstrong and Buzz Aldrin, and what it must have been like to watch the moon mission, then decided to halt all that and go look at the stars (Big lives in the end area of his town, with much land undeveloped, so you can usually see quite a few stars and clear sky, and we tend to do a mile and a half walk every Monday, just for fun).
Well, yesterday, I saw the announcement that Neil Armstrong had died. He was 82, and I responded to the sad news, but my niece had no idea who he was, and my uncle thought it was Lance Armstrong I was talking about.

I often think about the space race, and what it would have been like to be a kid when Apollo 11 landed on the moon, and what an experience that might have been. What do I have that is equal to that? Baby Jessica being rescued? When Haley's Comet went overhead and I couldn't see it from my front yard? The release of the Michael Keaton Batman film? The year that dead guy won the election over the actual, living candidate? 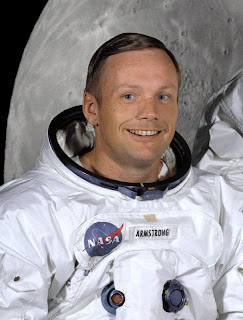 I don't know, really.  But Neil Armstrong (as a concept more than as a man) is really fascinating to me.  That a man, at thirty-eight years of age, would accomplish something no one had ever done before (and only a half-dozen would ever do) . . . where do you go from there?
It's kind of like Harry Potter defeating the forces of evil when he was only, what, eighteen?
Not that I'll ever achieve something comparable, but it is a question.  Maybe there's a story in that.
Posted by Rish Outfield at 7:26 PM No comments:

Walk of the Living Dead

My friend Big works in the news, and he mentioned to me a couple of years ago that there had been a zombie walk in the state capitol.  A zombie walk is a strange sort of gathering where strangers dress as the undead and have a kind of parade for no real reason I can think of.  He and I thought it would be fun to participate in the next zombie walk, then forgot about it until the following year, when Big found out about it on the news just as he had the year before.  We had missed that one too.  So, when 2012 came along, we became a bit more careful, vowing we'd go to it this year. 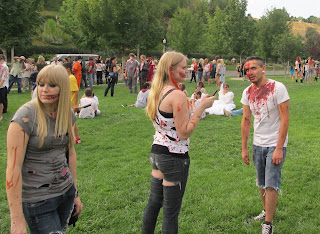 I had spoken about it with my eleven year old niece, and she was excited about the prospect.  My four year old nephew was timid at first, but then became thrilled with the idea of going.  In fact, when I got to work on that zombie movie earlier this summer, and came home to show off my makeup, he was disappointed that I hadn't taken him along, thinking it had been that zombie walk I had promised him. 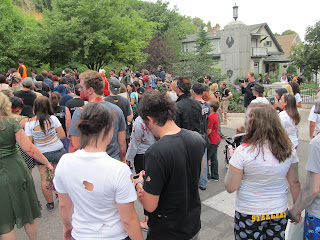 Well, if you know me at all, you know that I wanted to dress the kids up as zombies and take them along more than I even wanted to go myself.  We went to thrift stores, and picked out clothes we could tear up and soil for this outing, and I went to the party supply store to get makeup for us and Big's children.  I was even tempted to dress up the one year old, but that probably wouldn't have been wise.  We tested the makeup on him last week, and he wouldn't stand still and rubbed off what little I got on him.  Ah well, next year. 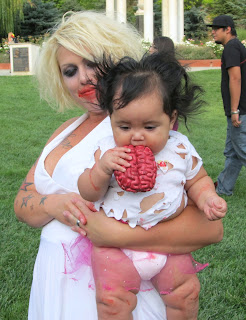 I was pretty disappointed and upset today when Big told me his kids no longer wanted to go, and very nearly told him to force them to participate and get a divorce.  In the end, though, his youngest daughter changed her mind, and rose in my estimation tenfold.  My niece did her own makeup, my sister made up my nephew, and I did what I could to create a unique zombie look for myself.  It felt a great deal like Halloween a couple of months early. 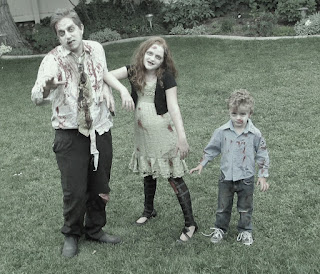 An army of zombies gathered in the city park, some with only minor ornamentation, and some with amazing, disgusting, or darned attractive costumes.  Weirdly, the split between male and female zombies was way off, and not in the way I would have anticipated.  And many of those undead girls were young and attractive. 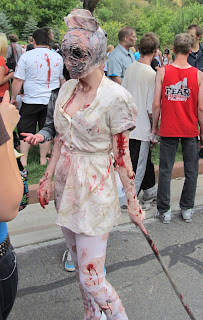 We began in the park, the made a procession down the sidewalk, looping around downtown streets, amusing many, making some uncomfortable, then finally crossing in front of the capitol building and back to the park.  My nephew really got into it, reaching for onlookers and moaning, and though there were a couple of babies spattered with fake blood in strollers, I'm certain he was the cutest kid there. 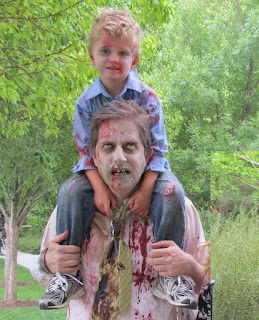 There were hundreds of photographers and many journalists there tonight, so I went to one of the newspaper websites to see if any of our group got in the shots they used (we didn't).  Unfortunately, I also made the (oft-made) mistake of reading the comments at the bottom of the story.  The second one down read, "It disgusts me that in this difficult time of recession and hardship that so many would choose to waste their time on this worthless endeavor."  Because all of the words were spelled correctly, I can't rule out the possibility that it was my father who wrote the comment. 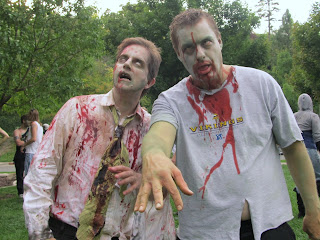 Now, my first inclination was to yell "Oh, eff you" at the computer.  Actually, my first inclination was to chastise myself for having read the story comments, because that never ceases to bum me out, shock my senses, or piss me off.  But my second thought was to close the website and go onto Facebook, where people who had participated were commenting on how much fun they had.  They shared their pictures, and I found myself, my nephew, and Big's daughter in some of them. 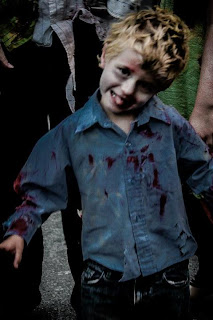 I took a long shower, managing to get nearly all of the makeup and blood off of me, tried to get a bit of work done, then decided to go to bed a bit early (for some crazy reason, I couldn't go to sleep until after five last night).  I turned out the light and closed my eyes, and suddenly remembered the criticism of that one comment on the Tribune website.  And I had to consider his words (or her words, I suppose assholes can be female too).  We are in a time of hardship and recession, and I could have been spending my evening either making some money, writing (I have a handful of stories still in progress that need constant care, or they'll die on the vine), or editing my podcast.  Instead, I spent quite a bit of money (what with the makeup, the costumes, the gas spent, and the meal afterward), and have little to show for my August 12th but an expanding waistline and a handful of photographs. 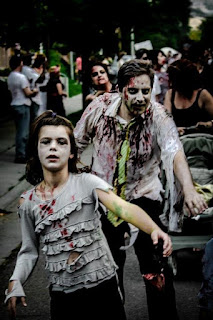 But you know, who cares what some troll on the internet thinks?  I went somewhere with my friend, and made a memory (hopefully a good one) with my nephew and niece.  I actually exercised, carrying the lad until my back started to bug me, and enjoyed the fresh air of a warm summer evening.  I had had a good time, and I had shared it with people that mean something to me.  One man's "waste of time" is another man's "new positive experience."

Glass half full, boys and girls.  Half full.

Rish "of the Living Dead" Outfield
Posted by Rish Outfield at 4:38 PM No comments: