Gary Dowell over at "Far-Fetched Fables" once saved my life in Bavaria.  It was actually pretty heroic, and when he tells the tale, his drinks are always free.  Later I told him, slowly recovering in an undisclosed medic station underground, "If you ever need me, just ask." 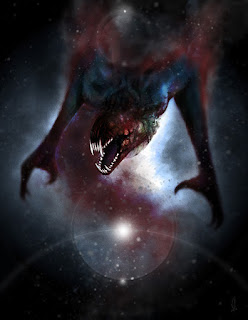 Well, he asked.  Here is "The Cow and the Beanstalk" by Julie Frost, a sort of fractured fairy tale involving adultery, a curse, witchcraft, little people, giants, and magic beans.  It's available at THIS LINK.

Whether you like my performance or hate it, you can't say I didn't give it my all.  Consider us even, Special Agent Dowell.

Posted by Rish Outfield at 10:57 AM No comments:

So, the audiobook version of my first novel "Into the Furnace," is now available over at Audible.com.  Here's a LINK to it, so you can rush over and buy a copy.  I know you want to. 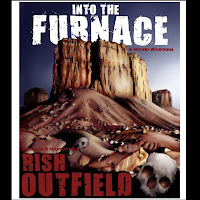 Actually, I've no idea if you want to, but I did try to channel California Rish there.

I do the narration, and I worked very hard on it, so if you like my performances, that should make a difference.

I've also got another episode of the Rish Outcast here, where I talk a bit more about the production, and include a sample from later in the tale. 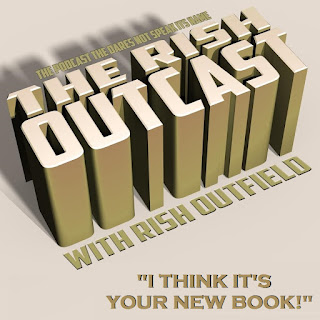 I try to remain spoiler-free here, but remember that it's a Weird Western, and that I wrote it, so you know what to expect.

Here is a a forum page I created if people want to talk about the book, and I think I'll do another episode of my solo podcast sometime later where I talk about the writing of the book, and include all sorts of spoilers in that one.  I'll warn you when it comes, but just to be safe, maybe you should buy the book, huh?

You can also Right-Click RIGHT HERE to download this episode to your dee-vice.
Posted by Rish Outfield at 10:20 PM No comments:

Oh, I Have So Many Names 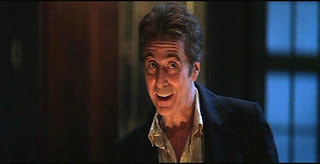 So, I believe I have mentioned that my goal is to publish the sequel to "Birth of a Sidekick" at the beginning of next month.  I'm about halfway through the final pass (I found one paragraph with three typos in it . . . who am I, Drac Von Stoller?), and then I will go ahead and put it up on Amazon, before finishing up the audio version.

Dave Krummenacher kindly offered to do the cover for me again, which I'm posting below.  More great work from that man right there. 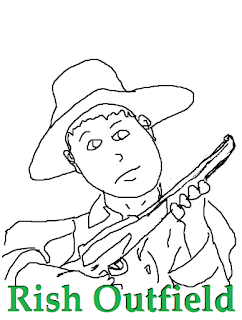 The problem is: it still doesn't have a title.

I have never struggled with a title like this one before.  The notebook version and the MS Word file are both called "Birth of a Sidekick 2," but I'll be gosh-darned if I'm going to name it something that lazy.  Sorry about the language, kids.

I wanted something that sounded like (or meant the same thing as) "Second Chance for a Sidekick," but couldn't come up with one that jumped out at me ("A Sidekick's Second Chance" didn't sound quite right either, and I was/am unable to think of a single word that means "second chance").

I drove to meet Big, turning off my radio and focusing solely on the title.  "A Sidekick's New Life?"  "Toil of a Sidekick?"  "A Sidekick's Struggles?"  "Hard Luck for a Sidekick?"  "A Sidekick Goes Forth?"  I came up with about thirty possible titles in that time (I also couldn't think of a single word that means "growing pains**"), but still failed to find one that felt right.  I talked Big's ear off about it for another hour, and he gave me some feedback on a few that I liked but didn't love.

I wonder if I have to love one of these titles.  It may sound like California Rish, but I really liked the title "Birth of a Sidekick," back in 2005, and still like it now.  "Challenge for a Sidekick" and "A Sidekick Struggles" are both good, but still not what I want.  I want a title that tells you it's a new adventure in the life of Ben Parks, but also fits this particular story, if I'm gonna go on telling them.

So, I'm giving up.  I'm going to list my five "finalists," if you will, and see what my fans/friends tell me.

All of those seem fine, but nothing really speaks to me.  Let me know, in the comments below, if you feel spoken to.

A couple titles, such as "The Travails of a Sidekick" and "The Labors of a Sidekick" will have to wait for a future story, alongside "Clash of the Sidekicks," and Big's favorite, "Death of a Sidekick."  Hopefully that last one will be a long ways off.

*That's probably a rhetorical question, but I can easily recall falling in love with my titles for stories (such as "Silent Night of the Living Dead," and "The Toy Room") I hadn't even written yet.  And a couple of those I never even finished, despite being so proud of the name I'd come up with.

**Big did suggest "The Wonder Years of a Sidekick."  Which is so bad, it's almost not bad.
Posted by Rish Outfield at 10:50 PM 5 comments:

John Ballentine produces these awesome "Campfire Radio" tales every few months or so, usually Horror audio dramas made with loving care and real talent.  This is the third one I've been able to participate in ("R.I.P." and "Night Delivery"), this one called "Woods Ferry." 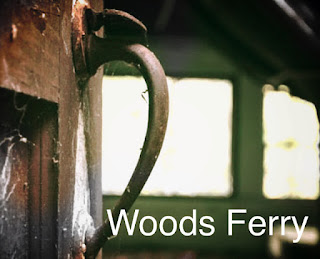 A trio of young people enter a closed-up old town, where the inhabitants were evacuated long ago.  But are ALL of them gone?

Rish Outcast 44: Ask Me No Questions (The Undiscovered Country)

In 2015, Tom Tancredi sent me a list of questions that I answered in a couple of episodes.  Now it's 2016, and it looks like Tom has some more for me to answer. 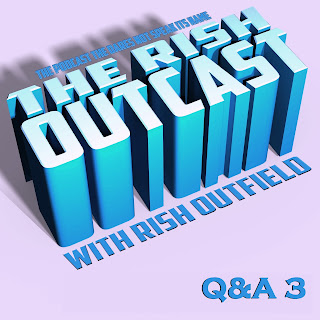 I'll probably break these up over several episodes, since the resulting answers ended up much more rambling than they did the first time.  But here is the first installment of those answers, and though I say I'll continue answering them "next week," I think I'll alternate between these and other episodes for the next little while.

If you're in the mood to download the episode, please Right-Click HERE.
Posted by Rish Outfield at 11:00 PM 3 comments: