Suffering From Delusions of Grandeur?

By Thor, you'd better be.

Actually, I really ought to let people know about this show every time a new episode drops.*  Marshal Latham and I have a "Star Wars" related podcast that we try to do once a month, where we get together with a guest and talk about some aspect of the Saga.  It's probably a bit too irreverent, since I'm associated with it, but hopefully it's also entertaining to listeners.

The setup is a good one, since Marshal does the heavy lifting (like creating episode art and uploading the files), and we trade off the editing chores every other show.

I don't know how much gas is in the tank with this particular show.  It could be that we get tired of it, and it fades away in time, but it's also possible someone out there responds to it, and we end up doing it for a long, long time, eventually having guests on the show that actually worked on the Trilogy, like the dude who played the Gonk droid, or the guy who put the saliva on the Rancor monster, or the chap who said, "You Rebel scum" in RETURN OF THE JEDI.

You can find the podcast over at www.delusionsofgrandeurpodcast.blogspot.com.

*This is the second time I've created this blogpost, but I need to accept the fact that if I continue to compose my entries on AOL, it's going to save a blank file over a completed post every other month or so.

Rish Performs "Stopover at the Backworlds' Edge" on Audible

The second novel I ever recorded for Audible was "The Backworlds" by M. Pax.  I was still learning, and there are a couple of things I'd do differently on it, but it sounded a heck of a lot better than the first book I did, and its content was a hell of a lot better than the third book I did.  So, when the author asked if I'd like to narrate the second installment in that series, I was happy to do so.

I was happier, though, when I discovered how fun the second book was, and that the majority of the characters were the ones I already knew the voices of (from the first book).  In fact, I was even able to alter the voice of one of the characters I was never really happy with from "The Backworlds."  So that's nice. 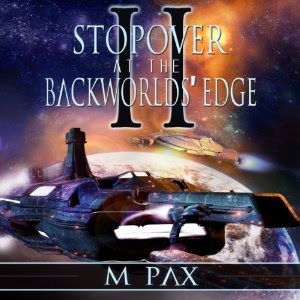 "Stopover at the Backworlds' Edge" picks up a year or so after the first book, when Craze and his friends have settled on a dusty, barren world, hoping to make a life for themselves catering to the ships that pass by there.  But their luck takes a turn for the worse when a big ship from the evil Foreworlds docks outside his little bar.  A bunch of new enemies--and one old one--are there with a nefarious purpose in mind, and aren't used to taking no for an answer.

Science Fiction is a really fun genre, and I've not read a lot of those type of books.  I'm pretty fortunate that I'm getting to perform two different Sci-Fi series now (and may actually get paid to do this one!).  Check out the link here:http://www.audible.com/pd/Sci-Fi-Fantasy/Stopover-at-the-Backworlds-Edge-Volume-2-Audiobook/B00K33KL2G/ref=a_search_c4_1_2_srTtl?qid=1399585274&sr=1-2
Posted by Rish Outfield at 2:45 PM No comments:

Babysitter of the Week

I took my six year old nephew to see CAPTAIN AMERICA: THE WINTER SOLDIER this week.  You may be saying, "Hey, that's an awfully adult show to be taking a child to, don't you think?"  Funny that you didn't say it before I took the boy, but only now, when it doesn't help me at all.


Surprisingly, though, the lad sat still and watched with me through the entire runtime of the movie.  The first time I took him to a movie (2012's THE AMAZING SPIDER-MAN), he had to get up and go to the bathroom no less than three times.  This time, though, he sat next to me, though he consumed both his and my junk food, and occasionally put his seat up and sat on the end of it like a huge booster chair, exactly as I used to do at the old Frewish Theater back in Praisden, so many years ago.  He'd put his head against mine, listening to me translate the subtitles and Nick Fury cellphone messages, and that was cool.


And he had many questions.  Somehow, he had not seen the first CAP movie, so he didn't know who Hydra was, and when I would explain, he misunderstood (first I said it was the evil SHIELD, but he thought I meant Steve Roger's shield; then I said it was Red Skull's group, but he thought I meant the anti-Avengers team Red Skull has in the cartoon).  Also, I responded very strongly to the beatings the characters received in this movie, and my nephew would say, "What?" when I would wince or gasp.  At least he didn't ask why I cried at the Peggy Carter part*.


When I took him to see AVENGERS almost two years ago, he shouted "Thanos!" at the end of the film, prompting the guy in front of us to turn and say, "Who?"  This time, however, he had no idea who the two twins were at the coda teasing the next movie.  Guess that's what happens when your characters don't look like the source material, Joss "You Actually Know Better" Whedon.


The most interesting thing we came out of the movie with was the boy's reaction to the GUARDIANS OF THE GALAXY trailer.  My friend saw that trailer first, and described it as no less than the greatest trailer of the last ten years.  I wasn't quite so impressed when he showed it to me, but with each repeated viewing, I appreciate it more, especially the use of "Hooked on a Feeling."  I'm not sure that movie will be a success, but at least it doesn't look like a hundred other movies that have come out since Michael Bay started making execrable Transformers pictures.
My nephew got a big laugh out of the final line in the trailer, which I've laughed at literally every time I've seen it (as have audiences).  Wreck-It Ralph says, "They call themselves the Guardians of the Galaxy," and the British snob beside him says, "What a bunch of A-holes."


After the movie, my six year old nephew kept saying, "What a bunch of A-holes!" which made me laugh, but I knew he (or I) would take heat for it, so I told him not to say that.
"Why?  Is it a bad word?"
"Well, not exactly, but it's . . . sort of a bad word."
"Okay," he said, then actually said, "What a bunch of assholes."
I was impressed that the lad knew, at six, what the A stood for, but told him, "Whoa, whoa, that one actually is a bad word.  Better not say that one."
He nodded, and by the time I got him home, he was saying, "What a bunch of hellholes."  I don't know where he got that one, but I warned him we'd both get in trouble if his mom heard him say that one.
"More trouble than A-holes?" he asked.
"Yes," I said.  "I think it's cool if you say 'A-holes,' but if your grandma or your mom hear you, they won't think it's cool."  But, I added, if he said it around my cousin Ryan, that would be fine.


Rish
*His mother used to delight in catching me crying in the movies.  She would often draw attention to it for those around us.
Posted by Rish Outfield at 5:47 PM 2 comments: