Here is the only souvenir I have from my failed audition for the "Jeopardy!" game show. 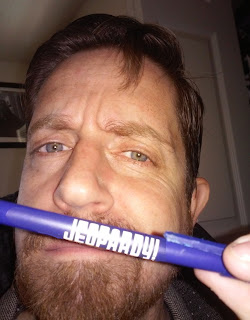 Oh, except for shame.  I got to take home two bags of that.

Posted by Rish Outfield at 4:42 PM No comments:

Sorry about the lateness of this episode.  I worked a double-shift one day this week, and every day since I've been trying (unsuccessfully) to catch up.

So, in this episode I'm sharing my now-dated 21st Century story "Library Week." Then I talk a while about how it got so dated so fast. 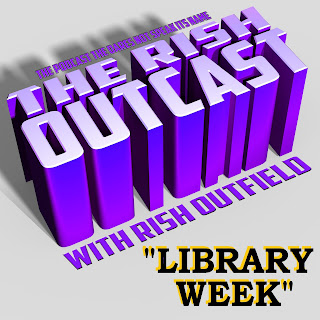 Warning 2: Not that F-word.

If you absolutely have to download this episode, go ahead and Right-Click HERE.

If you wish to support me on Patreon, you know WHERE TO GO.

If you hate me and my story, you also know WHERE TO GO. 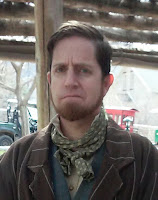 Rish Outcast 103: What A Stupid Concept

Here's that oft-mentioned "lost" episode from 2015, where I talk a bit about my "Dead & Breakfast" anthology concept, and the first story written for it, "True Ghost Encounter." Thanks to Gino "The Badger" Moretto for the lovely logo.
Posted by Rish Outfield at 11:45 PM 1 comment:

Or more like, "Shite-ing Update," am I right, kids?

In my case, I think I'm pretty right.

So, the deadline for Big and I to swap stories was last night at midnight (my time, why not add an extra hour there), and my story is in no condition to be read, podcast, or even burned. Over the last week, I forced myself to go to the library four times--technically, five (since I once left to pick up my nephew, then brought him back to the library with me)--even if I didn't have my craptop with me. What I would do was jet on over there, if I only had a half hour free, and perch myself in front of one of their library computers, fire up Word, and type until it was time to go. No checking email, no surfing the internet, no pictures of Jodie Foster glaring angrily at men and/or superhero movies, just focus on writing.

And it pretty much worked. Once my time was done, I'd start up gmail, and I'd send the day's work to my Inbox. And there it all stays, in fits and starts, along with the stuff I wrote on my craptop, and worse, in my notebook. Because Big had set a deadline, then extended it two days, I had plenty of time to write a short story, and the day before it was due, I forced myself to do the above, and achieved an impressive number of words, the last two of those being "the end."

But "the end" was a lie, just like the byline. I think "Arthur Terwilliger Jr." is not going to cut it as a pseudonym.

For my story, which is a bit like the Lara and the Witch ones, but with a brother and sister, is shaping up to be a Hefty bag full of words, a novelette if I'm lucky, a novella if I ain't. Never a novel, though, 'cause that would swing around to being lucky again.

The Metallica song that inspired it is called "My Friend of Misery," and any connection to that song has fled along with my inspiration. But there comes a point in the story, where there's a sort of ending, and then the tale jumps forward in time, so I felt like I could get away with putting a "the end" there, send the story to Big, and keep writing every day until the rest of the tale is written. It's a bit of a cheat, but just a bit.

In other news, I just completed another story for "Pseudopd," and a podcast that severed all association with us several years ago asked me to do a narration. It was difficult enough I had to stop narrating and read the story through to the end. Hey, I get to be an editor again! The thing had a great idea, but needed a polish, as the punctuation was all wrong (and sometimes absent), and there were two occasions when one of the male characters was referred to as "she" or "her," and I realized with horror that, being a disgusting man, I had ASSUMED the characters were male and they'd been female all along. Whoops. But a moment later, the pronouns became masculine again and I realized that the author had just made a mistake. Then there were a couple of lines of dialogue with no attribution, and worse, one that was attributed wrong. I had to make an executive decision and omit one sentence (since the thing that character said was not included), and rearrange one paragraph so it made sense (I think it had been rearranged by accident anyway). Normally, it doesn't take long to do a narration, but this one took me until the wee hours of the night. And if I did my job right, you'll never know. Yay.

So, that brings me back to my own story, and the reason for writing all this. I didn't make my deadline, and sent Big nothing. Even worse, I persuaded him to give me a couple more days to organize everything, during which I secretly hoped to make my story--written under duress and without much help from the muse--feel like one of my better works. A monumental task, let me tell you.

On the bright side, I wrote every day this month so far. Except today, since this doesn't count.

Rish Outfield, Writer on the Storm 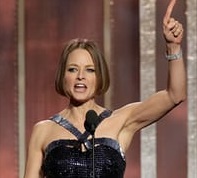 Posted by Rish Outfield at 7:07 PM No comments:

"Hey, I sure appreciate y'all letting me come over and watch with you," my coworker Tobin said, sitting down on the couch to my left.
"No problem," I told him, passing the pretzels. "We love the Academy Awards in this house. Angie always likes the dresses, I like the pomp and reverence, the kids like the film clips, we all pretty much cry during the In Memorium. And nobody else in the neighborhood cares about them."
"That's right," my wife said from my right. "There's always a barbecue  on the street for the Super Bowl, for the Playoffs, every time Trump tweets something awful, the World Series. But not the Oscars."
"It's a special night for me too, every year," Tobin said. "So, thanks for making me feel at home."
On the television, Jimmy Kimmel was just starting his monologue when Tobin muttered something under his breath.
"What was that?" I asked, sure I had heard him wrong.
"If Get Out don't win Best Picture, I'm gonna murder the whole lot of you," he repeated.
Oh. That's what I thought he had said.
He passed the pretzels on to my wife.
Posted by Rish Outfield at 2:50 PM No comments: