Here's the first healthy chunk of my 2004 novella "New Year's Day." Dave, Britt, and Rob know all about the famous Laemmle House, but do they dare to venture inside? 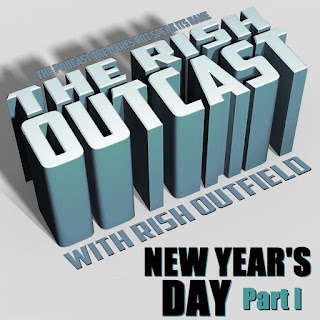 In this section, we get all the way up to the edge of The Big Reveal, and then I end it, to start talking about this job I had in the Nineties.

But hey, this ain't your first rodeo. You knew what I was when you picked me up.

Here's a link to the full story on Amazon, if you want it.

Logo by Gino "Do Not Enter" Moretto.

Posted by Rish Outfield at 8:24 PM No comments:

In early 1986, my Uncles Ali and Len took me to see a forgettable Kevin Bacon movie called QUICKSILVER.  When it was over, however, they suggested we sneak into a second movie, and that movie was THE HITCHER.

Most folks remember Rutger Hauer from BLADE RUNNER, and that's fine (easily his most iconic performance), but THE HITCHER made me a fan of the man.  It was a dark, scary, and fun movie that happened to be the first R-rated film I saw in the theater, and afterward, my Uncle Ali kept telling me that John Ryder was coming for me, and we made fun (via puns) of the rather horrible death of Jennifer Jason Leigh's character.  A seminal experience for me. 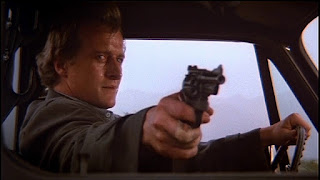 The man passed away this week, at the age of seventy-five, due to an (really?) unspecified illness.

I really loved Rutger Hauer.  I was excited to see him in anything he showed up in, from BATMAN BEGINS to LADYHAWKE, from one of the DRACULA 2000s to BLIND FURY ("I also do circumcisions"), from an ALIEN rip-off called SPLIT SECOND to a recent movie actually titled HOBO WITH A SHOTGUN.  When Sam Raimi started making Spider-man movies, I hoped that eventually they'd get to Kraven the Hunter, and that Rutger Hauer would be their go-to guy.

But for me, it will always be John Ryder, my favorite Eighties film Slasher.
Posted by Rish Outfield at 11:57 PM No comments:

I Narrate "Soul Cleaver Clarence" on Cast of Wonders

Some time ago, Katherine Inskip over at Cast of Wonders (The YA Fantasy Podcast) contacted me about doing another story for them.  Apparently, author Matthew Jarvis had tasked me* with narrating his piece.

It was a tale called "Soul Cleaver Clarence," about a young dragon unhappy with the role in life he's been cast in, who meets a young human woman who's unhappy with the role she's been given.  It was enjoyable and I got to do some fun voices in it.  However, this is a full-cast production, so the voice talents of Alexis Goble, M.K. Hobson, Jen R. Albert, Cheyenne Wright, and Anne B. Davis as Alice will round out (i.e. save) my performance.**  I know a little something about putting together full-cast productions, so the episode must be pretty special to go to all that extra trouble. 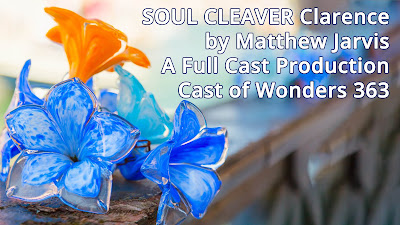 Mayhaps you will enjoy it as well.

You can check it out AT THIS LINK.

**But maybe, for science's sake, I should release my solo performance, just in case people are morbidly curious.  You never know.

Posted by Rish Outfield at 7:30 PM No comments: 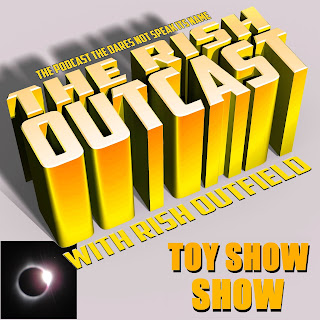 In this one I tell you about taking my eleven year old nephew to a toy show in Las Vegas, who goes to such shows, selling on eBay, what NOT to say to a customer, an unfortunate auction, and almost taking him to see a total eclipse (of the heart).

Even if every now and then you fall apart . . . enjoy!

To support me on Patreon, just Left-Click HERE.

Posted by Rish Outfield at 5:58 PM No comments:

Rish Outcast 143: Eight O'Clock In The Morning (By Ray Nelson) 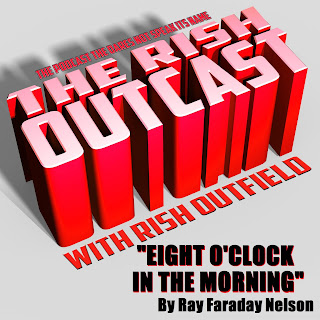 Rish (and special guest star) presents the classic Sci-Fi story "Eight O'Clock in the Morning" by Ray Faraday Nelson.
It's a tale with a very familiar premise, but how about the opposite one?

You can Right-Click HERE to download the episode directly . . .

Logo by Gino "They Live" Moretto.
Posted by Rish Outfield at 2:16 PM No comments:

Today Is A Special Day If you happen to be driving up Route 78 in between Bruneau and Murphy, make an effort to stop by the Noble Oak Bed and Breakfast, and if there's a room, book one, and try to stay awake that night.  After a while, there will be a knock on the door.  And whoever is standing on the other side of it will be someone special . . . someone important to you personally . . . someone dead.

What you do then, well, that's up to you.

Oh, and the second of July also happens to be the birthday of my childhood best friend.  Coincidence?