My "My First Story" Essay on Emerian Rich's Website

A few weeks back, Emerian Rich, who runs the Horror Addicts podcast and webpage, which ran, I believe, five of my stories, asked for people's testimonials on their first story, which she would run weekly on her website.

I was happy for the chance to guest on this blog, since Emerian has always been very nice to me.  It was only after I had accepted that I discovered what we were supposed to be blogging about.  And the first novel I wrote was less than two years ago, only published last summer*, and there have been none since then.  What could I possibly talk about, then?

But in re-reading her invitation, I discovered it was "My First Story," rather than "My First Novel," which makes me wonder why I even included the above paragraph.

Well, why include anything, if you're going to have that attitude about it?  Come on, focus on the positive for once.

Like the fact that you can read my little blogpost at this link, if you feel up to it.

*And read by, what, six people . . . two of which have since taken their lives?

Posted by Rish Outfield at 7:58 PM No comments:

There really ought to be a comma in there.

So, this is something I recorded really recently when the local neighborhood movie theater closed down.  It was among the shortest episodes I've ever produced . . . so I decided to write a little something for after the show.  Padding, if you will. 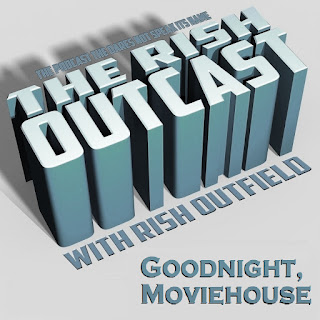 Hey, you wanna download the episode directly?  Simply Right-Click on THIS LINK.
Posted by Rish Outfield at 9:10 PM 1 comment:

I Perform "Single Parent" on Cast of Wonders

In honor of the holiday, I got to narrate an odd little story over at the "Cast of Wonders" podcast.  It's called "Single Parent," by Sarah Gailey, and it tells the familiar tale of a dad checking his kid's closet for monsters . . . and finding one.

"Cast of Wonders" touts itself as The YA Fiction podcast*, and once again, this term vexes me.  In this case, there's no one in the story that even remotely would count as a young adult (ie, teenager), as the three characters are in their thirties, a six year old, and a grandmother.  Plus, there's the dreaded eff-word in the first five seconds of the story, which my reading has taught me would caused a YA reader to spontaneously combust.

But my gut is telling me that YA is whatever the person selling it says it is, much like when I ran a Horror Film review website and constantly had to do battle with the definition of "Horror."  Which films would we review on our site and which ones wouldn't we?  Why would PSYCHO count but not REAR WINDOW?  Why did JURASSIC PARK, TERMINATOR, and KING KONG count, but not WESTWORLD, CYBORG, and MIGHTY JOE YOUNG?  Ultimately, the decision was made that "Horror" was whatever the hell I said it was, and if other people disagreed, well, eff 'em.

So, apparently "Single Parent" is YA, and if I disagree, eff me.

It is Horror, though.

The story is certainly interesting (as the man's wife used to be the one to dispose of pesky spiders and/or closet monsters, and now he has to figure out how to do it himself), and it's neat they had a Father's Day story planned enough in advance to get it out for the day.

Anyway, check it out if ye like, at THIS LINK.  At the very least, it's got a fairly good narrator.** 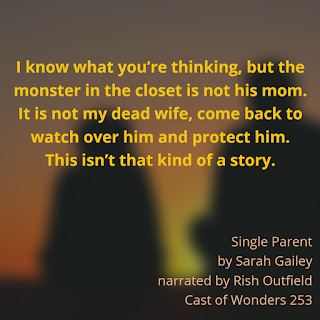 *Oh, and these guys are now part of the Escape Artists network of shows.  I must have missed when that happened.

The Podcast That Dares 18: Celebrity D&D

Rish presents his most elaborate sketch yet, an episode of nobody's favorite reality/game show, "Celebrity Dungeons & Dragons."  With, of course, your host, Fake Sean Connery! 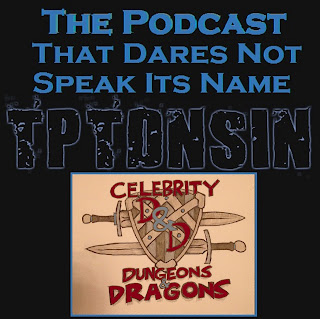 Thanks to Gino Moretto for his input (and the logo), and let's hope this goes over well.

Not much here.  I just wanted to be able to use "unreliable narrator" and pretend I'm clever.  This is a segment of me falling asleep while narrating.

I was going to post this more than a year ago, when I was editing an E.C. Tubb audiobook and discovered the condition of my recording, but I forgot about it and threw away the outtakes when I got to that part.*

But here we are in 2017, and I've found another section in Abbie's new book that will do almost as well (in the Tubb book, I went on for much, much longer, but I've discovered the audio tends to be unusable no matter how many times I wake up and reline in that condition).  This may or may not be entertaining, it's difficult to say.

Even though I'm not quite done with my narration (I probably have a dozen or so more chapters, then I'll start on retakes), Abbie has begun to publish the audiobook in installments over on her Patreon page.  You can probably (possibly?) check it out HERE.

In the meantime, I will try to stay awake.

*Which is a shame because it was much more pathetic that this clip is.  In that one, I forced myself to carry on, despite my condition, until there would be twenty seconds or so in between lines where I had closed my eyes and only resumed when my head dipped and that woke me up.  Now I'm wise enough to just quit and say, "Well, there's no use continuing now if I'm just gonna have to record it again anyway."  It's like when you're falling asleep while driving, despite the radio and the window and slapping yourself.  Nowadays, I just pull the car over at the next rest stop or clear spot, and take a nap for half an hour or so, rather than risk actually zonking out right before a turn or cliff.

Posted by Rish Outfield at 5:24 AM No comments:

Hey, there's another "Delusions of Grandeur" episode up over at "Journey Into..."  This one was a long time in coming, because I'd often call Marshal Latham up and tell him what I heard or saw at "Star Wars" panels at local cons, and he did the same when he went to one.  So, if our regularly-scheduled episode ever fell through, we always had this topic in our back pocket.

Once again, I do appreciate Marshal's partnership on this show.  I know he's busy with the other aspects of his life, but he often is the one who suggests we hook up and produce another episode of "DoG" (as he calls it).  Maybe nobody listens to the show, but I will continue doing it as long as he wants to.

So, why not check it out at THIS LINK?  Seriously, why not? 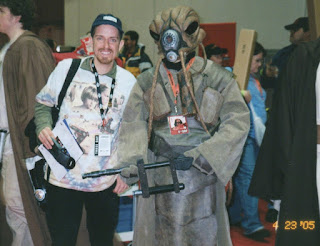 In this episode, Marshal took a phone call so we recorded in two sessions . . . and then I accidentally deleted the second half while clearing old files off my recorder.  So, what I did was listen to Marshal's half and tell my stories into my recorder again, trying to get the timing right and figure out what I must have said to make him respond or laugh.  It ended up taking much longer than just doing the episode over again would have taken . . . and one of us was not thrilled with the result.

Besides the time I erroneously referred to his children as "Ugnaughts," it's probably the only time I've ever sensed Marshal was angry about something.  And guess what that made me?  Yep, angry too.  Ain't life grand?
Posted by Rish Outfield at 9:50 AM 1 comment:

Out With The Old

In 2004, I went to my first comic convention.  It was while I was living in Los Angeles, and it was pretty exciting--so many vendors selling stuff that I might buy, if only I had any money.  Mostly, though, I went to panels (free) and stood in line to have artists do sketches for me (also free), but I did buy one thing that I remember: a black Spider-man t-shirt.

According to the calendar, it's been thirteen years since then, and I have to admit, that Spidey shirt has seen better days.  It's a bit faded, the neck is kind of stretched out, and there is cracking around the white spider symbol.  It had a good run, but I figured it was time to let it go.

Here's the last time I wore it. 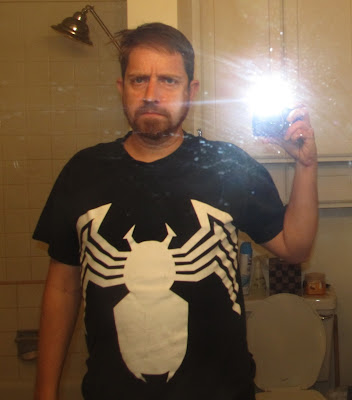 But, I have money now.  And I waste it on things all the time that would make the 2004 me drop to his knees and curse the gods on Mount Olympus with Vesuvian Syphilis. 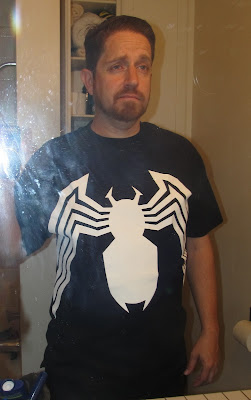 I sure have grown up in thirteen years.

Posted by Rish Outfield at 1:29 AM No comments:

I worked quite hard on this.  Heck, even the trailer was a bit of a headache.

Hopefully, you'll be there when this goes live.
Posted by Rish Outfield at 8:35 PM No comments: