I went out to the family farm yesterday afternoon to mow lawns and deliver new shutters for the windows, and was distressed when it got dark even earlier than it had the week before*
I mowed as quickly as I could, checked the traps, refilled the horses' troughs, and was just feeding them (the horses belong my uncle and I enjoy giving them apples and the grass from the mower bag) when the sun went completely down.

As I was trudging back to the house (I'm not as young as I used to be, or as fit as . . . well, as you are, gentle reader), I heard a cow lowing in the pasture next door, and what was either an owl or the biggest damned dove I'd ever heard.  I paused, cocked my head, and figured it was the familial madness creeping in again, and went inside.

I had a few extra minutes because I'd arrived an hour earlier than usual, and sat down to try to plan out another Ben Parks story (I had thought quite a bit during my mow about a mini-adventure he and Deputy Anglesworth might have had).  As I was typing, I heard it again: a low hooting that probably wasn't a cow, but an owl.

I went outside and heard it in one of the trees my brother partially cut down next to the chicken coop.  I walked back there, and there it was, a Great Horned Owl, in my childhood backyard.  It looked down at me and then swiveled its head around to take another call. 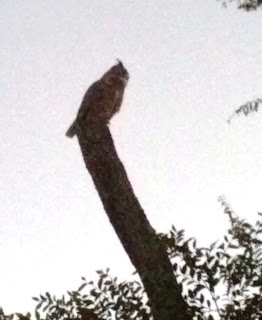 In all the years I lived in that house, which definitely were my most formative, I never saw an owl, or even heard one, as far as I can recall.  We did have an eagle in the tree by the tin garage one winter, but that's neither here nor there.


I got my phone out to take a picture, but the light was gone and no good pictures could be had. 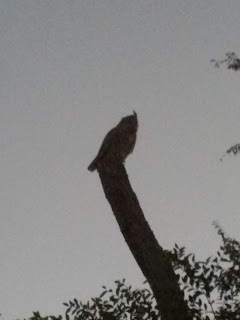 OR, if you prefer to look at it this way, my phone is too crappy to take good photos or video, and had you been there by my side, we'd have some awesome evidence of my discovery. 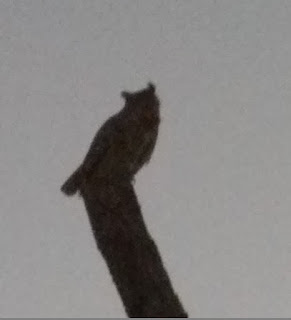 I stood there watching it for a minute, enjoying the presence of some pretty cool nature.  At one point, something (my brother's escaped gopher maybe?) caught its eye in the field next door and it looked like it might take off after it, but it had better things to do.  Eventually, I stupidly thought I would try to imitate the sound it was making to see what it would do, and my hooting sound was totally pathetic and sounded nothing like it did.  The owl was not impressed and decided to vacate the premises.  Its wingspan WAS impressive, though, and I felt like it had to be three feet long, maybe more.  It flew off, went to the neighbor's yard, and perched at the very highest point of their tree, where I could see it, but not so up close.**


Anyway, I don't know that this was worth a full blog post, but I'm in the middle of editing a podcast, so any distraction will do.

Oh, and hey, it's possible it wasn't a Great Horned Owl, but another kind (although you surely can't see it in the photos--it had that distinctive head of the horned kind, though).  If I'm wrong, let me know.

*I wasn't gonna share this part on the blog in the slim chance that it gets back to my brother or deceased father (who would [both] surely call me a dumbass), but last week, I left to go down there to mow at around seven-forty-five pm, knowing that it gets dark around nine o'clock.  But no, apparently it's no longer summertime, and as I approached my hometown, the sun was already vanishing below the mountains.
So, as soon as I'd parked in the driveway, I raced to start the lawnmower and get the lawn cut before the light was completely gone.  I decided to mow in the backyard first (since the one in the front is on the western side and would get sunlight slightly longer), but halfway through, it was completely dark and I was just mowing in the grey post-twilight.
All through the summer, my brother has been doing battle with a gopher (or several gophers) in the backyard, and has tried poison, traps, and just sticking the waterhose into each new hole it makes to hopefully drown it.  This seems not to have succeeded, but in his last effort, he filled up the hole in the lawn with water . . . then placed a brick over the opening so the rodent couldn't escape.
I didn't see this brick as I was mowing . . . but I did hear it.
Point being, if my dad had been around, he would've called me an idiot for mowing in the dark, and had I been the one to set a brick there, he would've called me an idiot for putting a foreign object on the lawn.

**At one point, I did draw its attention by asking if it had heard about Bill Cosby's trial and the sentencing.  It asked, "Who?" so I didn't press it.


Posted by Rish Outfield at 9:24 AM No comments:

So, the next (scheduled) episode of the Rish Outcast was created to plug my next book (or "book" if we have to be catty . . . and honest), but I've submitted it to Audible twice and had it rejected twice.  That basically means that the next episode will either be promoting an audiobook that doesn't yet exist, or will have to be delayed.

I'm wondering if I should go ahead and air it, and keep to my schedule (which has already fallen behind because I lost a couple of days trying to edit a video podcast I kept having trouble with), or if I should just air the next episode in the rotation and catch up with the missed episode early in November (I'd sort of have to do it that way to get all the "Sidekick's Journey" shows in before Halloween).  Or do I air Episode 120 before 119 and just jam 119 in there whenever I get the okay from Audible, despite it breaking up the chronology, because who really cares in what order the shows were released in, if they're numbered anyway?

What do you think?
Posted by Rish Outfield at 12:49 AM No comments:

Rish Outcast 118: Cabin in the Cold

Rish goes again to the family cabin. And cold follows.

But what about werewolves? And chatty ravens? 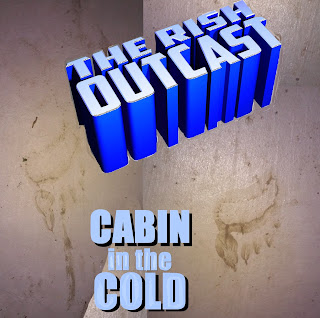 Go on and download the episode by Right-Clicking HERE.

Go on and support me on Patreon HERE.

Cover art by Gino "The Other Odinson" Moretto

Here is the clearer of the three photos I took of the "werewolf tracks."  You be the judge. 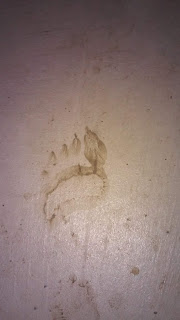 Here is the big moth I took a picture of while talking about Poe. 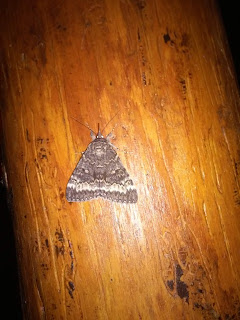 Sorry about the delay on this, but I finally got around to seeing the final episode of "Downton Abbey" this week.  As you can imagine, it made me question all of my life choices. 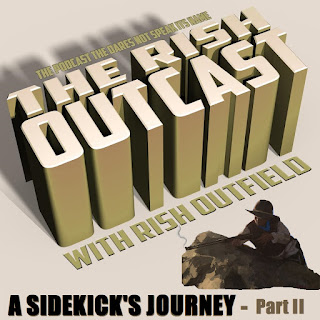 This is the second installment of my 2015 book "A Sidekick's Journey," the sequel to 2005's "Birth of a Sidekick," Outcast episodes 14-17.  Continuing the story, Ben Parks meets Lorelei Skruggs, an associate of the late Lean Rider, and quite an adventurer in her own right.  Perhaps together they can pick up the hero's mantle where he left it.

If you wanna download the episode directly, Right-Click HERE.

If you wanna support Rish on Patreon, you can go HERE.

If you wanna buy "A Sidekick's Journey," you can go HERE

If you wanna buy "Birth of a Sidekick," you can go HERE.

If you wanna really upset Rish, you can go HERE.
Posted by Rish Outfield at 10:23 AM No comments:

Rish Outcast 116: A Sidekick's Journey I

Rish presents the first installment of his 2015 book "A Sidekick's Journey," which is a sequel to 2005's "Birth of a Sidekick," ran as Episodes 14-17 on this podcast.  In this one, Ben Parks does his best to survive in 1890's Arizona without the Lean Rider by his side. 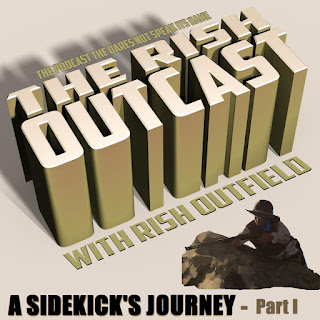 This will go for multiple episodes (either four or five), and I hope people enjoy them.

If you wanna donwload the episode directly, Right-Click HERE.

If you wanna correct my spelling on "download," Left-Click HERE.

If you wanna buy "A Sidekick's Journey," you can go HERE

If you wanna buy "Birth of a Sidekick," you can go HERE.

If you are upset that Rish is running one of his audiobooks on the podcast, you can go HERE.

If you wanna support Rish on Patreon, you can go HERE.

If you wanna reprimand Rish for not getting Marshal to reprise his role as the sheriff, you can go HERE.

Posted by Rish Outfield at 10:30 AM No comments: