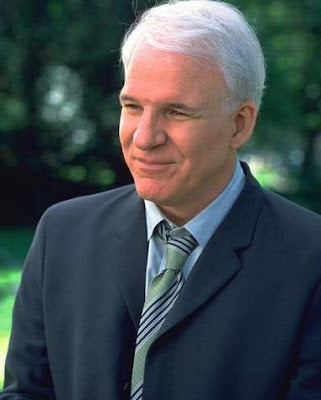 So, as I mentioned last week, PINK PANTHER 2 just opened, and I had no intention of seeing it. I really hated the first one (if you can call a remake of a film with several sequels "the first one"), so I thought I'd ask for the bottom three (or five) Steve Martin films from everybody too.


Tyranist was first to respond on this one, giving me:
1. The Man with Two Brains
2. Planes Trains and Automobiles
3. Novocaine
4. All of Me
5. Dead Men Don't Wear Plaid

Strangely, two of his bottom picks were two of my top picks. Hmmm.

Evil Cousin Ryan told me that he's never seen a Steve Martin film he didn't like, so his list consists of nothing.

Which is pretty high praise, I guess.

My pal Saur gave me:
1. Bringing Down the House
2. Housesitter
3. Pink Panther
4. Cheaper by the Dozen
5. Sgt Bilko

Since hardly anyone contributed to this one (it may be that my emails are relegated to the spam folder now), our bottom five appear to be:
1. PINK PANTHER
2. NOCOCAINE
3. MAN WITH TWO BRAINS
4. BAD STEVE MARTIN REMAKE OF GOOD FRENCH FILM
5. BAD FRENCH REMAKE OF BAD STEVE MARTIN FILM

Yeah, I'd better give this a rest for a while.