Alright, I really did it with these two.  Sigh.

I packed up a bag, got some lunch and my laptop, and drove down to the family cabin.  I'd never gone down there by myself before, and except for a run-in with a ginormous woodchuck (and perhaps a ghost*), it wasn't particularly terrifying.

Could've been, though.  I kept imagining people standing outside the windows (or inside the room with me), and there were noises I sort of had to convince myself to ignore (including one that sounded remarkably like some fingers tapping on the window behind where I sat reading).

I intended to go rowing, get some exercise that way, as well as podcast, edit audio, watch a video, and write.  I managed all but the first one.

After talking to Abigail Hilton, I started a new project, sitting down and sort of forcing myself to write an entire prologue before I would allow myself to watch the DVD I'd brought along.  That made me feel pretty good.

I would've been fine to hang out at the cabin, but I did force myself to drive over (a real man would've walked, but what you gonna do?) to the lake and watched the sun go down.  Just me and my only friend.  Took a picture or three. 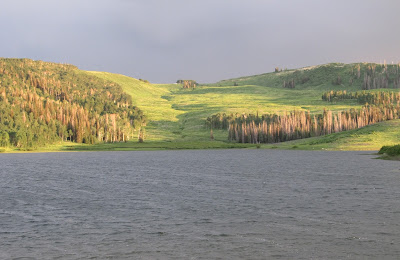 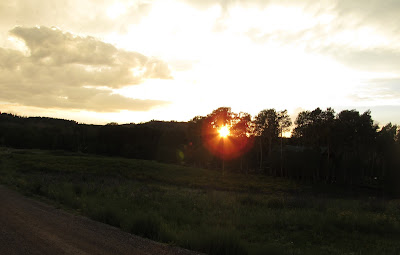 
I take a lot of pictures, but I rarely share them.  It'll make me seem like I'm ninety years old, but it's just so much work to plug the camera into the computer, find the photo, transfer it over, and then find it again on my PC.  Where's my Geritol?

Then, amazingly, I awoke nearly two hours earlier than I normally do, and more than a half hour before the alarm I'd set went off.  I wrote for a while before breakfast, made myself some sandwiches, went outside and recorded a Rish Outcast, then came back in and sort of forced myself again, this time writing until the end of a chapter of the YA novel I called "Balms & Sears" back when it was going to be a short story.

I'm pretty proud of all I accomplished, though of course, I could've done more.  If I had planned Friday better, I might've gotten an extra hour or more in at the cabin (instead, I drove a half hour out of my way so I could buy sandwich makings and a couple peaches that cost what a watermelon should), but Saturday was pretty productive.  I even had time to sit among the deer, hummingbirds, and squirrel-tarantula hybrids and read my book, which was nice.

I think I should do this again in August, just head down on a Friday, and come back sometime on Saturday.  In fact, I might have simply stayed the night tonight, had I brought another change of clothes and another DVD.   We'll have to see.

*I never did figure out what closed the door when I first arrived.  Let's just put it out of our minds.

Posted by Rish Outfield at 9:41 AM